Welcome to the Redneck Riviera 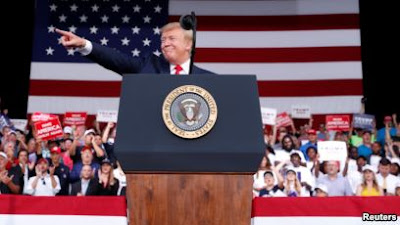 Donald Trump was in my old backyard this past week and the crowd was loving it, as they would a Wrestlemania match.  It was the kind of taunting and absurd boasts we have come to expect, ratcheted up a notch when someone from the crowd shouted, "shoot them," when Trump rhetorically asked how do you stop the migrants?  Our President smiled and quipped, "only in the panhandle you can get away with that statement."  Not really.  You can get away with it most anywhere these days but it was amplified by the media and in turn became the subject of my old high school friends' posts on facebook.

It's not often you get a president in this neck of the woods.  It's not like South Florida.  It is a land of pine trees not palm trees, famous for the manufacture of turpentine in the early 19th century.  The panhandle has long been dubbed Lower Alabama and the Redneck Riviera because its history dates back to before the Civil War.  Andrew Jackson established the new American territory and became its military governor in 1822.  You can even find Antebellum mansions along old Highway 90 that runs through the north part of the state.

Several of my old friends attended the rally and weren't afraid to say they loved it.  Others chimed in and a lonely few chose to buck their views.  A flame war ensued.  I chose to watch this one from the sidelines.

What I find instructive about these facebook wars is what living in a bubble does to you. You might remember the Reverend Huckabee giving us a lecture on bubbles not that long ago.  He's the author of God, Guns, Grits and Gravy, who felt liberals were living in a Bubbleville created by Hollywood and the New York and Washington media.  Today, you see conservatives living in a bubble created by Fox and syndicated conservative news media, oblivious to the harsh realities surrounding their insulated world.

To them the migrant problem is easily fixable by guns.  More troops and poses comitatus and we would be done with all these foreign invaders.  They never stop to think for one minute that all that cheap food they eat is the result of cheap migrant labor, or that the shirt on their back is also the work of cheap migrant labor, or those front lawns cut every two weeks on their block, or the nannies that take care of their kids.  Those nasty migrants literally form the backbone of our menial labor industry.  Shoot them and you won't have those everyday low prices at Walmart.

However, there is no point bringing this up because Magaheads have become so insulated in their bubbles that any contradictory information simply doesn't make it into their thick skulls, which is why I have quit intruding on their timelines.  I'm usually scolded pretty harshly if I do.

It is better to remember my friends for the way they were rather than what they have become, especially the ones I thought were far more intelligent than this.  I'm not going to let Donald Trump turn my old friends into enemies!  This dark cloud will pass.  We will probably never see each other quite the same way again, but we can share some old memories and bring a smile to each other's faces from time to time.