History repeats itself as farce 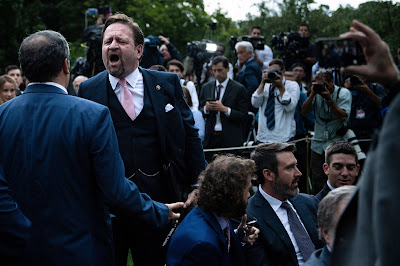 Never a dull moment in The Apprentice: The White House Years, as former apprentice Sebastian Gorka strutted over to tell Playboy journalist Brian Karem, "You're not a journalist - you're a punk!" to the chants of "Gor-ka, Gor-ka" from the right-wing media choir whom Trump was honoring at a social media summit on the White House lawn.  It's almost as bad as the time Reagan invited Jerry Falwell and his band of Evangelist ministers to the White House.

Trump may be the dumbest president we ever had, but he is not the worst.  We can thank Reagan for ushering in these kooks back in 1981 when he rode into Washington on the backs of the so-called "Moral Majority."  Reagan, or rather his inner circle, quickly sought to undermine the progressive reforms of the Carter administration and all things Democratic.  The only problem was that Congress was still Democratic, so the House and Senate often overrode his vetoes, like the Clean Water Act that the Gipper vetoed in 1986.  Reagan even removed the solar panels from the White House roof purely out of spite.

This was the beginning of a restoration project by the Republicans that led to them overturning Congress in an unprecedented rout in 1994 with their so-called Contract with America.  Since then Republican policies have held sway for the better part of the last 25 years.  There was a brief spell between 2006 and 2010 when the Democrats controlled both chambers of Congress, but the bloodletting over the Affordable Care Act allowed the Republicans to take back the House in 2010 and essentially stymie any further progressive legislation.  In 2014, the Republicans regained the Senate too, allowing Mitch to effectively block all of Obama's judicial appointments, including Merrick Garland as Supreme Court Justice after the unexpected death of Antonin Scalia.

Scalia had been a Reagan appointee.  He was a major proponent of the unitary executive theory, which gave the President autocratic control over the executive branch of government, and denied Congress or the federal courts any means of recourse.  As it turns out, this is not the case, as Congress does have oversight powers, and the federal courts can block executive orders which it deems unconstitutional.  Nevertheless, Republicans have tried to exercise this right in each of their administrations, especially when it comes to foreign policy, which they regard as solely under the authority of the President.

This unitary privilege allowed Reagan to funnel arms and ammunition to the Contras in Nicaragua, and fund other insurgent groups around the world, including the so-called freedom fighters in Afghanistan during the Soviet-Afghan War, all in the name of fighting communism.

Reagan's administration was deep in scandals throughout his eight years, leading to the investigation, indictment and/or conviction of 138 administration officials.  The Iran-Contra investigation dominated the news, with former Col. Ollie North eventually being sent to prison, but others like Donald Rumsfeld and Dick Cheney skated clean, eventually to come back and serve George H.W. and W. Bush.

The Bush presidencies were also fraught with scandal, but at least H.W. Bush sought UN approval before going to war with Iraq.  His son chose to have his envoys and allies barge out of the Security Council when it was clear the other members of the council weren't going to give him such authority.  An effort they were convinced was organized by France resulting in a boycott of French fries and French toast on Capitol Hill.  As a result, we ended up in a war with Iraq that lasted the better part of ten years.  This on top of an ill-advised war with Afghanistan which continues to this day.

As bad as Trump is, his administration officials are rank amateurs by comparison, as seen in Sebastian Gorka's outburst on the WH lawn.  Hard to believe Gorka actually served as Trump's deputy assistant and strategist before returning to television in August, 2017.  It was part of a purge that also resulted in the end of Bannon's short tenure as Trump's chief adviser.  Before, the British-Hungarian con man served as Hungarian PM Viktor Orban's deputy assistant and strategist and was a frequent contributor to RT, or Russia Today.

Trump has essentially surrounded himself with clowns, which is why Dick Cheney is none too happy about the current situation.  In fact, many former Reagan and Bush advisers have been pretty harsh on the Trump administration, mostly because Trump appears to be too close to Putin.  For decades the conservative foreign policy had been all about keeping Russia isolated, but Trump has essentially given Putin free rein anywhere in the world, to the point that Russia effectively blocked American efforts to overthrow the Maduro government in Venezuela earlier this year.  However, this isn't really fair, as George W. Bush pretty much turned a blind eye to Central and South America, with Russian warships doing maneuvers off the coast of Venezuela back in 2008.

Obama tried to make lemonade out of lemons by re-establishing an embassy in Havana and hoping to appeal to Maduro's better self at a UN assembly.  It didn't work out in Venezuela, but things looked quite promising in Cuba before Trump came to Washington.  Since January, 2017, we have seen a return to the same hard line attitudes toward Central and South America that we saw under previous Republican administrations.

It's hard to say whether it is incompetence or weakness or both that underlies Trump and the chicken hawks in his administration.  John Bolton, another surly figure from the Bush years, was notably peeved when Trump refused to follow through on air strike after Iran took down an American drone.  Bolton had been doing his damnedest to initiate a war with Iran only to see it blow up in his face.  Is Donald really so squeamish that he worries over a few hundred civilian lives?  He doesn't seem to worry that much over the migrant children he keeps locked up in cages on the Mexican border.  Most likely, Trump got a call from Putin, who told him ixnay on an air strike, otherwise those pee pee tapes might leak out.

Trump's closeness to Putin has befuddled conservative hawks.  They can't figure out for the lives of themselves what Putin has over Trump.  Dear Donald doesn't seem to move without consulting Vlad first on foreign policy.  He even takes cues from Erdogan, who apparently encouraged Trump to pull out of Syria, but this too was probably at the behest of Putin, who has the Turkish president under his thumb as well.

What's confused neoconservatives even more is Trump's ongoing love affair with Kim Jong-un.  No one could have imagined the romance these two struck up after Donald spent his first year threatening the third-generation Kim with complete and total annihilation. These empty threats would come to characterize the Trump administration, which is why Iran didn't take his most recent threats very seriously.

Nevertheless, Trump has cultivated a devoted base, which we saw this past week at his social media summit.  Never has a president enjoyed such an loyal following that is willing to blow off his irregularities small or large.  The only conservatives who don't seem to accept Trump are the old-guard Republicans, but who are they going to turn to?  Certainly, not the Democrats.  They are forced to endure the reality show president, while Sebastian Gorka struts around like a prized cock on the White House lawn.  History repeats itself as farce.