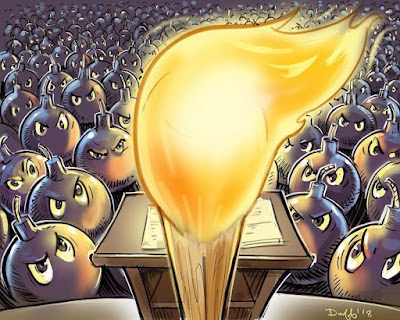 Mass shootings have become all too common.  The vast majority appear to be guys using firearms to vent.  They are disillusioned by the empty lives they are living and feel the need to let the world know they exist.  The AR-15 or whatever assault weapon they choose to use becomes an equalizer.

This was the case in Dayton, where a young man, 24 years old, managed to fire off more than 50 rounds in less than a minute, killing 9 and wounding more than 20 others.  Police responded immediately, but sadly the damage was already done.  Police took out the shooter, sparing us the process of a long drawn out court case.

However, the situation in El Paso was entirely different.  Here we had a 21 year old man, who had driven 10 hours to specifically take out Mexicans at the border, after publishing his hate-filled manifesto online.  He picked the largest and busiest Walmart in the city and methodically went after persons that looked Mexican.  In this case, the police took the assailant alive, and so we are now left to sort out his manifesto and determine to what degree this young man was driven by the highly-charged anti-immigration rhetoric we have heard the past three years under Trump.

The White House would rather you look at Dayton because the assailant in this case left a trail on social media that indicates he was attracted to socialist candidates like Liz Warren and Bernie Sanders, and left-wing extremist groups like Antifa.  However, police have said there is nothing to indicate his attack was politically motivated.  Nevertheless, the WH is determined to establish a false equivalence, just like it did in Charlottesville, because they seem determined to protect the white nationalist views their president harbors.

Kellyanne Conway may be "hopping mad" at the perceived media bias, but to this point the public isn't buying it.  The El Paso gunman was very clearly carrying out an agenda, which to a large part has been one the president promoted at his rallies.  The language the gunman used is virtually the same as the president.  Words the assailant obviously took to heart.  By contrast, The Dayton man was not driven by anything Warren or Sanders specifically said.

You can say what you will about the Dayton man, but he is the all too typical mass murderer.  He will be instantly forgotten, especially since he is not around to defend himself.  The El Paso shooter will be front and center for months to come and this the White House can't stand.  Like the young man who shot up the African Methodist Episcopal church in Charleston, he was driven by white supremacist views.  A pattern that has become increasingly familiar during the Age of Trump.  Hate crimes have risen under this president, whether he likes it or not.  The Charleston mass shooting occurred in the summer of 2015, one day after Trump announced his candidacy.

Trump has long used insulting, abusive and highly toxic language, driven by a very narrow view of what it is to be American in this country.  His father supported the Klan during a time it tried to extend its reach beyond the Mason-Dixon border, and it seems these white supremacist views stuck with Donald, although he is loathe to admit it.  This language reached an ugly head in 2011 when Trump adopted the Birther campaign and made it his own.  Ever since then he has been the American idol of the white supremacist movement, which poured large amounts of money into his campaign in 2016, and continues to support him in 2020.

Yet, Republicans persist in their effort to protect Trump on one hand while disavowing white supremacism on the other.  You can't have it both ways.

The El Paso mass shooting was a direct result of Trump's highly inflammatory speech, which is on full display at each and every one of his rallies, even the one he held in El Paso back in February.  It was here that Trump called special attention to his border wall, and where the first privately funded segments of his notorious wall were erected this past Spring, thanks to a gofundme campaign started last year.  You don't drive ten hours without a special purpose in mind, which is why El Paso residents are "hopping mad."  Little wonder none of the survivors of the malicious attack wanted to meet Trump after he had politicized his Dayton visit on twitter.

For Trump, it is not about giving condolences, its about clearing his name.  He is determined to show that he is no way responsible for these cowardly acts being carried out by the fringe of his radical conservative base.  It's the same with shock jocks who refuse to own up to their words, after they were parroted by mass murderers.

One can argue that these aren't Trump's words, as he actively cribs his tweets and speeches from right wing sites, but he makes these words his own the minute he utters them at rallies.  He may think he is just playing to a crowd, as any stand-up performer would, but these words carry much more resonance coming from the commander-in-chief.

We have never had a president that so firmly embraced the rhetoric of the white supremacist movement.  He repeats all the same talking points at his rallies, evokes much of the same language in his tweets, and has only marginally distanced himself from this radical fringe despite all the warnings from his own staff. Worst of all, he has two sons who are even harsher in their right-wing rhetoric, as they openly cater to this ugly underbelly of American society on Fox News and other conservative news outlets.  Little wonder that white supremacist leaders are ecstatic to have Trump in the White House, even if he hasn't exactly fulfilled all their abject agenda.

What Trump has done is sown discord, anger and hostility on a level we normally see only in television and movies.  He feeds off this chaos, churns it over again and again to keep himself at the center of attention.  Whenever this harsh rhetoric takes an ugly turn, he retreats to one of his golf courses to ride out the storm. It took two days for Trump to give a speech in response to one of our bloodiest weekends in civilian carnage.  Too busy with golf and weddings to issue a formal statement until Monday morning.  Even when he did, he mixed up cities, as he read from a carefully prepared script, amply illustrating what little connection he had with the events that took place over that fateful weekend.

It is this incredible disconnection with the mainstream of society that will ultimately prove his undoing.  Trump thrives on the fringes of society.  What Kellyanne Conway refuses to admit is that an incendiary figure like Trump is just as appealing to the extremists at both ends of the spectrum, as both left-wing and right-wing militants seek an end to society as we know it.  They both live in fantasy worlds with guns being their means of showing the world they exist.  You can talk all you want about involuntary commitment of the mentality ill, but very few of these persons show any outward signs of their "illnesses" until it is too late.  They are walking time bombs, only needing a match, which Trump provides at his rallies, to set them off at any moment's notice.