Whatever Happened to Jimmy Hoffa? 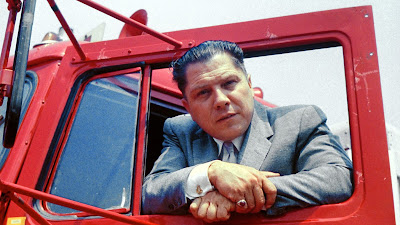 It's pretty clever to reframe Hoffa's ties to the mob through Frank Sheeran.  Charles Brandt coaxed the "confession" out of The Irishman shortly before his death in 2003, and laid out corroborating evidence in his book, I Heard You Paint Houses, published the following year.  The book has been widely discarded as pulp fiction, and in turn Scorsese has taken some heat for giving weight to Sheeran's account in his epic movie, but then I saw the Netflix original as a geriatric version of Goodfellas.

Scorsese relishes in not just one but several conspiracy theories from the 60s and 70s.  According to the Irishman, it was the mafia in Chicago that carried Illinois for Kennedy in 1960; the Bay of Pigs Invasion was a mafia-coordinated effort that didn't get the aerial support promised by Papa Kennedy; and the mob had Jack Kennedy rubbed out when the president no longer answered to their interests, namely getting rid of Castro and letting them have free access to Havana again.

Hoffa had a separate beef with Kennedy.  The Teamsters and other labor unions were believed to be in bed with the mafia, which this movie amply illustrates.  The Irishman also implies Hoffa threw his support behind Nixon, which you would think would be against his best interests.  I suppose this was to give a reason for young Attorney General Robert Kennedy going after Hoffa, finally getting his conviction in 1964.  It was only after Hoffa exhausted all his appeals that he faced jail time in 1967.

The Teamsters offered their support to Nixon in 1971 in exchange for the President considering a pardon for Hoffa.  The catch was that Hoffa would retire from union activities.  While this made Jimmy none too happy, the Irishman chose to focus more on the old boss' acrimonious relationship with Tony Pro, who became the favorite of the mafia.  This sets up the fallout that occurs between Jimmy and the Bufalino crime family, leaving Sheeran caught in the middle.

As the story goes, the Irishman owed his rise in the labor world as much to Russell Bufalino as he did Jimmy Hoffa.  It was Russell's hope that Frank would keep Jimmy in check, but no one kept the fiery labor leader in check.  With events spiraling out of control Frank found himself thrust into the position of settling the matter once and for all.

This is in sharp contrast to the 1992 movie, which didn't mention Tony Provenzano at all.  Jimmy's anger was largely vented on Fitzsimmons, who had negotiated the deal with Nixon.  This caused a deep rift in the Teamsters.  However, Danny De Vito takes his own artistic liberties in casting himself as an imaginary friend to Hoffa and indulging in his own fantasy as to how Jimmy was ultimately dealt with.

It would have been long forgotten had not Scorsese dragged the story back up again.  Hoffa had faded into history.  Labor for the most part is in shambles, never really able to recover from the infamous 70s and all the Right-to-Work laws that followed.  Even Michigan is now a Right-to-Work state.  Hoffa and the Teamsters invested heavily in Detroit, only to see the auto industry crumble apart and leave Motown an empty shell.

Reagan and succeeding presidents, Republican and Democratic alike, have not been friends of labor, but we are seeing a bit of a resurgence in the labor movement today so maybe this movie will spark some interest.  I'm not sure Hoffa is the best role model.  Mostly, it is a crime movie, which Scorsese has long reveled in, bringing back his cast of favorites and adding Al Pacino as Hoffa.

I'm not sure who did Hoffa better: Al Pacino or Jack Nicholson.  The movies are told from completely different angles so you can enjoy them both on their own terms.  All I would say is that Scorsese's account of Jimmy's death is more convincing.
Posted by James Ferguson at 10:06 AM