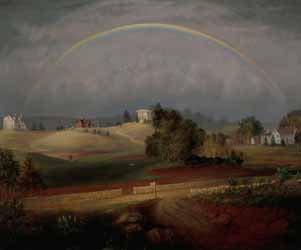 This month's reading group will be The Blithedale Romance by Nathaniel Hawthorne.  The critical reception of the book was mixed in its day.  Some thought it was an all too obvious critique of Brook Farm, while others simply took it as a romance novel.  Hawthorne and Melivlle were both critical of the Transcendentalists and the Utopian communities that were sprouting like mushrooms throughout Northeast and Midwest America, but from what I read it was more a sardonic pleasure in teasing Emerson and the Unitarians who established Brook Farm.

Hawthorne was actually a founding member of Brook Farm and throughout his life seemed to have struggled with his religious identity.  Modern day critics view the novel as an attempt to reconcile these emotions through his seven key characters.  It is obvious that he drew on his personal experiences in creating this novel, as any novelist would.  It is a story rich in symbolism and offers many interpretations.  We look forward to your comments.
Posted by James Ferguson at 8:41 AM