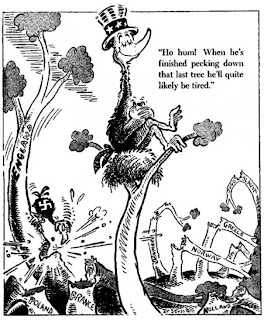 Safely enshrined as the "Good War,"  authors Lynne Olson and Susan Dunn explore "those angry days" that led up to WWII, when emotions ran deep as to whether the US should intervene in what was largely seen by Americans as a "European war."

Americans have long wanted to keep themselves apart from conflicts abroad, even when it effects the continent most of us have roots in.  It's not surprising that American industrialists were sympathetic toward Nazi Germany, as companies like Ford were actively engaged in helping Hitler rebuild his industrial base following the much maligned WWI.  Even when Hitler invaded Poland in 1939, many American businessmen refused to accept the ominous nature of his regime and urged the President to stand pat.  It would be nearly two more years before the United States took an active role in the war, although Roosevelt found numerous ways to aid Britain and France during this time.

The principal subject of Olson's account is Charles Lindbergh, who felt Britain was doomed and the US should accept the Third Reich.  Like Ford, Lindbergh was a notorious anti-Semite, and had little sympathy for the appalling reports coming out of Germany.  He too seemed to feel that the Jews were the real enemy.

In Dunn's account, Wendell Wilkie gets a lot of credit for challenging the Republicans' isolationist views, and that even though he lost to Roosevelt in the 1940 election, he helped the President turn isolationist sentiment in Congress, and lend support to our allies in Europe before we became directly involved in the war.

Of course, the bombing of Pearl Harbor changed everything, and Roosevelt had little difficulty shifting public sentiment in the wake of this notorious air strike.  But, it is good to see two noted authors tackle the year(s) of indecision that preceded it.

Interesting to note that Theodor Geisel (Dr. Seuss) was an outspoken supporter of the war and drew over 400 editorial cartoons for the New York newspaper PM between 1940 and 1948.
Posted by James Ferguson at 1:50 PM