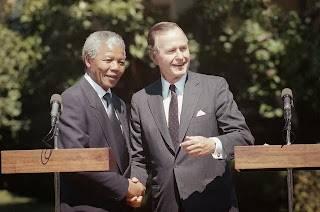 On June 26, 1990, Nelson Mandela addressed a joint session of Congress.  The speech begins at the 13:30 minute mark in the C-Span clip.  It was one of many historic events that shook the world in the short period between 1989 and 1991, creating a huge shift in the balance of power.  To George H.W. Bush's credit, he chose to recognize these changes, not ignore them as many within his own Republican Party would have preferred.

The Republicans had fought hard against the Anti-Apartheid Act that passed Congress in 1986.  Jesse Helms staged a filibuster against the final vote, supported by several of his vituperative Southern colleagues.  Ronald Reagan vetoed the legislation, but his veto was overridden.  Sometimes, the tide of history is simply too strong to be overcome.

George H.W. Bush wasn't going to make the same mistake, welcoming Nelson Mandela to the White House before the historic joint session.  He like so many Americans embraced Mandela because the ANC leader represented the ideals of the Civil Rights Movement that had been ongoing in the United States and South Africa for decades.

Martin Luther King Jr. had expressly stated Gandhi and Albert Luthuli as his role models, both were born in South Africa.  Gandhi would move to India.  Luthuli would head the African National Congress, and eventually win the Nobel Peace Prize for his efforts to break down the walls of racism and injustice. These were figures both King and Mandela embraced.  Few Americans seemed to understand this link, but many felt it when Nelson Mandela addressed the nation.

Having been in South Africa in 1990 when Mandela was released from Robben Island and having watched the events as they unfolded rapidly, I was greatly pleased to see the US finally renounce all its ties to the past regime and embrace the future of South Africa.  There were no accompanying photographs because for years it was expressly forbidden to publish any photographs of Nelson Mandela.  All people had was little more than a police composite sketch, which made him look old and haggard.

I would have liked to have seen a stronger political and economic union in the wake of Mandela's rise to the Presidency, but events in America took an unfortunate turn, and the message Mandela gave seemed lost on the new faces of the Republican Party, who took over Congress in 1994.

Mandela became President of South Africa in 1994, winning on this historic ballot (partial image).  He held the nation together through a very difficult transition phase which still continues.   The world has lost a moral compass.
Posted by James Ferguson at 8:07 AM