Time to take the gloves off 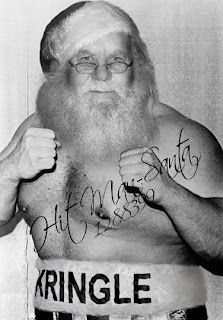 Boxing Day never took hold in the States.  This traditional British holiday was a day off for the servants who obviously had to put in a full day on Christmas.  They were given gifts on this day in the form of a "Christmas box."  It seemed to evolve from Saturnalia, where slave owners and slaves would switch roles for one day  It later became a banking holiday throughout the Commonwealth nations.

For Americans the day after Christmas is the big day for returns.  The shops have to deal with exchanges for all those Christmas sweaters and other items Americans politely said thank you for but set aside to be redeemed for something else, assuming receipts were included.

It seems much of our holiday season is driven by consumption, and it seems this was a banner year for the retail and food industry as signs seem to be pointing up as far as the economy goes, although Conservatives would be loathe to admit it.  2014 is predicted to be a good year economically, which doesn't bode well for the Republicans, given all the doom and gloom they have been promoting the past five years, although Business Insider claims the bad rollout of "Obamacare" resulted in a 13-point swing in voter confidence, with Republicans now ahead 49-44 per cent in generic Congressional races.  Of course you can take these early polls with a grain of salt.

CNN sounded a hopeful note with their annual presentation of "Hero" awards for community and other non-profit workers around the world.  It's an interactive affair where you can nominate and vote for your favorite "hero."  This year, Chad Pregracke walked away with the top honor, but I was struck by Robin Emmons, who has been championing wholesome foods for poor communities in North Carolina.

However, I have to question the idea of "Heroes."   This seems to be a word too much bandied about these days, especially when I don't think any of these persons regard themselves as heroes.  Nevertheless, it is a refreshing change from the "heroes" the Right Wing has been promoting these days.

For me, Boxing Day is a good day for reflection.  A time to pull my thoughts together and sound a hopeful note for the New Year.  I try to avoid stores, avoid fights and avoid slippery patches on my run.  I hope everyone is having a chance to relax and look forward to resuming our Reading Group in the New Year.