Let me articulate this better 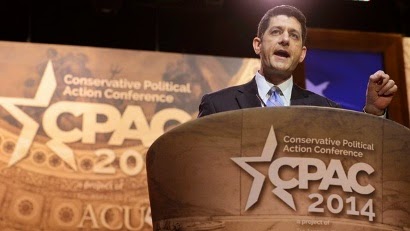 It would seem the Republicans want desperately to reach out to a broader audience, especially those Republicans considering a run for the White House in 2016, but it seems that at every turn they stick their proverbial feet in their mouths.  Case in point, Paul Ryan trying to address the issue of poverty:

"We have got this tailspin of culture, in our inner cities in particular, of men not working and just generations of men not even thinking about working or learning to value the culture of work."

The Wisconsin Congressman seems to view poverty as a matter of choice, fostered by years of welfare subsidies,  an all too common GOP refrain.  Apparently in an effort to appeal to women, Ryan placed the onus on inner city men, which carries with it rather obvious racial repercussions.  But, in this case Ryan apparently felt he didn't articulate his point properly and that his personal views on the subject were misinterpreted by the mainstream press.

This isn't the first time a Republican has had a problem with articulation. It seems these good folks would like us to think their heart is in the right place, but after decades of sponsoring corporate subsidies, tax breaks and just about everything else to lure industry into their states, addressing poverty is proving a bit difficult, especially for a political party that never took the issue seriously to begin with.

Republicans seem to think there are plenty of jobs out there but that Americans are simply unwilling to work.  They don't take into account all the civil service jobs they cut, particularly in a state like Wisconsin where Governor Scott Walker ushered in draconian budget cuts, adding tens of thousands to the unemployment lines.  The much vaunted private sector simply doesn't have enough meaningful jobs for all those former civil servants.  Meanwhile, schools find themselves having to make do with depleted staffs as the number of kids in the classrooms haven't shrunk accordingly.

It seems Republicans are trying to steal a page from Bill Clinton and pitch the old mantra, "I feel your pain," as they try to reach out beyond the GOP rank and file, which has been ardently against social welfare programs, the entire government for that matter.

The odd thing is that food stamp use and other forms of social welfare are highest in "red states."  In fact, many red states, particularly those in the South, take more out than they pay into the federal government, essentially making them welfare states. Despite all the hue and cry about FEMA, when there is a natural disaster you don't see red states rejecting federal emergency relief assistance.  They only object to it when some other state is getting it.

It would seem that Republicans recognize government as a necessary evil and are even willing to pay some lip service to social welfare programs, but in the end they still think poverty is a matter of choice, as witnessed in the food stamp surfer, who purportedly turned down an 80K job (offered by Sean Hannity) to live the Life of Reilly at taxpayers' expense on California beaches.
Posted by James Ferguson at 10:08 AM