The End of the Democratic Party as We Know It, Part I 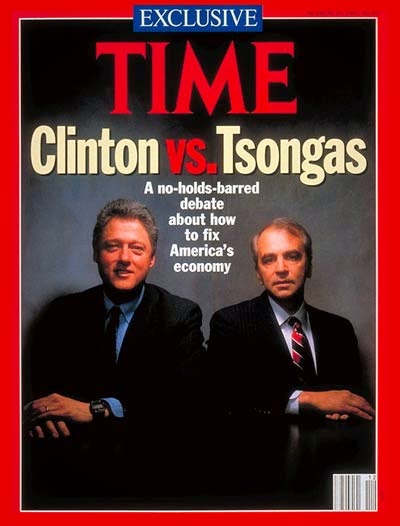 Back in '92 I felt something was seriously amiss when Bill Clinton won the Democratic nomination for President.  I didn't worry so much then as I didn't think he stood a chance in the general election against George H.W. Bush, who was still basking in the favorable light of the end of the Cold War.  But, enter Ross Perot and it became anyone's election, as the man who made himself a billionaire by distributing welfare checks, split conservatives in two, and Bill only needed 43 per cent of the popular vote to win.

Clinton's candidacy seemed like a long shot but the media picked up on him early.  He lost the first four Democratic primaries to Paul Tsongas, but cash started rolling in just in time for Florida, where Clinton scored a big victory on Super Tuesday, finally gaining the momentum he needed to carry him through the remainder of the primaries.  To that point, Clinton hadn't won a single state, but the media still considered him the front runner as many southern states would be voting that Fat Tuesday in March.

Tsongas had shot his wad in Florida, hoping to win this key state among the many primaries that day, and had few backers after this point, forcing him to withdraw from the primaries shortly afterward.  He made the sentient comment that Bill Clinton had ruined the Democratic Party, by going after conservative Cuban-American backers disgruntled with Bush's policy toward Cuba, which helped Clinton carry Florida.

Still there were reservations.  Jerry Brown was the only remaining threat to Clinton securing the Democratic nomination.  Brown ran a campaign based solely on individual campaign contributions, which would later serve as the model for Barack Obama.  Brown scored a surprise win in Connecticut, but didn't have the funding to carry him in the much larger state of New York, where Clinton secured the Democratic nomination, thanks to heavy Congressional Democratic support.

It hadn't been the greatest crop of candidates, but at least Tsongas and Brown represented traditional Democratic values.  Tsongas had hinged his campaign on small business, while Brown attempted to carry the mantel of Rev. Jesse Jackson's "Rainbow Coalition" in the election, promoting direct representation in government and greater social programs.  The Clinton campaign team clipped and pasted from the other campaigns to put together an agenda of sorts from whatever stuck in the minds of the electorate.

Democrats rallied around Bill at the convention.  Tsongas and Brown were pushed to the shadows of the big show, Clinton and Gore could bathe in all the media spotlight that would carry them in the general election.  The team of Linda Bloodworth and Harry Thomason produced the event, giving it the Southern charm of their highly popular television series, Designing Women.  Still, liberal Democrats should have known better, but they smelled a national victory for the first time in 12 long years.

Enter what may have been the best campaign team ever of James Carville, George Stephanopolous and Paul Begala, and they transformed an Arkansas governor into a national celebrity, billing him as "The Man from Hope."  Not that Bill had been simply "a face in the crowd" before that election.  He had served 11 years as governor of Arkansas and was an active voice in the National Governors Association.  But, it took quite a stretch of imagination to think this guy could rise all the way to the White House.

The national campaign was like no other.  Bill's political dream team managed to make his running mate, Al Gore, seem warm and almost human, with their strategically planned bus tour across America, perky young wives in tow.  Gore had even taken up the theme song of "You Can Call Me Al" by Paul Simon at the convention, while Bill co-opted Fleetwood Mac's "Don't Stop Thinking About Tomorrow."  They created an infectious feel-good vibration.  Two young Southern politicians criss-crossing the country together, igniting crowds who seemed desperate for dynamic new leadership. Clinton championed minorities, adopted women's rights issues as his own, and seized on the MTV generation.

I was living in DC.  It was great fun to be a part of that inauguration spirit when the Clintons and Gores came to Washington in January 1993.  Quincy Jones produced the huge outdoor event on the steps of the Lincoln Memorial, laden with symbolic value, which saw Kathleen Battle doing her best to present herself as a latter-day Marion Anderson while Kenny G screeched behind her on soprano sax.  There had been concert tents earlier that day in the Mall, with an amazing array of musicians performing for free.   Maya Angelou presented a poem she wrote for the inauguration, On the Pulse of Morning, which captured the high expectations now incumbent on the new administration.  The private inaugural ball culminated in this rousing live performance by Fleetwood Mac.

The first sign that the Clinton administration wasn't all it was cracked up to be was when he threw Lani Guinier under the bus.  He had nominated her for the head of the Justice Department's Civil Rights Division, but dropped her the moment Congressional support seemed unlikely.  Guinier was a controversial choice but she was well suited for the job.  Unfortunately, Clinton didn't have the balls to stand behind his choice, which would become the pattern throughout his administration.

He had an opportunity to make up for it by pushing the Health Care Bill he promoted during his campaign.  Expanded health coverage had been batted around Congress for decades and here was a golden opportunity to finally get legislation passed.  Democrats controlled both chambers of Congress and now had a Democrat in the White House.  This seemed like the ideal time to finally get this legislation passed.

Once again Clinton made what appeared as a daring move by placing his wife, Hillary, as head of the task force to draft a new federal health-care mandate.  All too quickly she became the target of the conservative attacks on the proposed bill.  Bill called in his campaign team to provide damage control, but their parodies on the "Harry and Louise" ads, the conservative groups had been running, fell flat and the bill became the rallying cry of Republicans in the 1994 midterms, which saw them overturn Congress in momentous fashion with their Contract with America.

Bill similarly botched his attempt to allow for gays to openly serve in the military.  He had made a big pitch to the gay community in his 1992 campaign, estimated at one time to be as much as 10 per cent of the electorate.  There was a lot of expectation that Clinton would deliver on legislation to finally rid the stigma of being gay in the military, but here too he let everyone down, settling for a "Don't Ask, Don't Tell" policy that didn't earn him any favors with conservative Congressmen either, who now saw him as an easy target.

He also struck a blow to minorities and many others living below the poverty line, when he presented his Welfare Bill in 1994.  Clinton had vowed to "end welfare as we know it," during his campaign, but Democrats didn't expect the Draconian cuts he projected in this bill.  Many naively thought that the "peace dividends" following the draw down from the end of the Cold War would result in long overdue money for domestic programs.  Instead, Clinton proposed his first round of tax cuts, leaving domestic programs as underfunded as ever before.  It took two years to get this notorious welfare bill through Congress, resulting in even more cuts to domestic programs.

Clinton also delivered on the promise  he made with Cuban-Americans in Miami, who had helped him win Florida in the 1992 primaries.  He refused to grant political asylum to Cuban refugees and allowed Cuban-American radio stations more transmission power to reach Cuba with their political air waves.