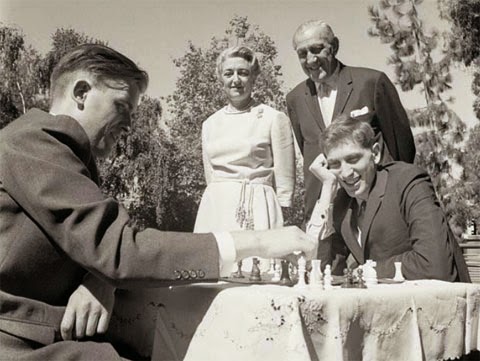 While on vacation I found myself playing chess in what seemed like a king's age.  We fell into a conversation about past chess greats.  I of course brought up Bobby Fischer.  My Danish friend mentioned a grandmaster from his country but couldn't remember his name.  As it turns out, he meant Bent Larsen, one of Fischer's toughest opponents, and whom Fischer beat on his way to claiming the world championship in 1972.

Fischer and Larsen were considered the two greatest threats outside the Soviet Union at the time.  Both were young prodigies.  Both were known for their daring and cunning, throwing more experienced chess players off guard.  The two met in Denver, Colorado, in the summer of 1971.  Larsen wasn't used to the high altitude and heat, and felt this gave Fischer an unfair home country advantage, which the young American seized upon to set up his fateful match with Boris Spassky the following year in Reykjavik.   If Larsen had more favorable conditions it may have very well been he who broke the Soviet stranglehold on the world of chess at the time. 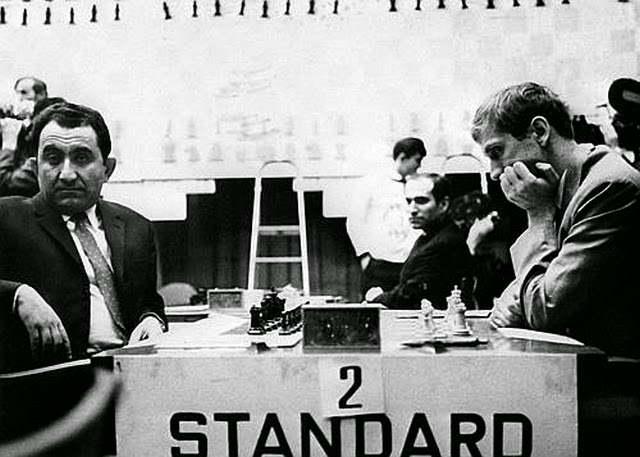 For three years, Fischer would dominate the chess world and become a major celebrity in the United States.  Not bad for a young man who had already contemplated retirement twice from the game, but Fischer seemed unbeatable when he began his run for a world championship in 1970, taking out former world champion Tigran Petrosian in another hotly contested match in Buenos Aires, covered by Sports Illustrated.

Put in the context of the Cold War, this was a monumental victory for the United States, but Fischer was uncomfortable with his celebrity.  He enjoyed the game itself, not all the political baggage that came with it.  He was already under scrutiny for playing Fidel Castro in a game of chess during an unsanctioned visit to Havana in 1966.  He held his Soviet opponents in high esteem, particularly Petrosian who he had played a number of times before in world competitions.  If Fischer was a giant killer, he was a reluctant one. After  that memorable match with Spassky, it seemed Fischer had nothing left to prove, relinquishing the world title in 1975 and disappearing from the world of chess.  In 1992, he once again defied the US government by playing a rematch with Boris Spassky in Yugoslavia, which he won.  Fischer still considered himself world champion, but a young Garry Kasparov was now regarded as the world's top player.

After the match, Fischer would settle in Hungary, as he was considered a fugitive by the United States.  Twelve years later, federal authorities tracked him down and detained him in Japan, where he briefly resided.  Eventually, he was granted asylum in Iceland in 2005.  A sad end for one of the world's greatest chess players.

His 60 Memorable Games live on, considered one of the greatest books on chess, written before his assault on the world championship. In 2011, Frank Brady published a book on Fischer.  Here is a review by Garry Kasparov who long wished for the opportunity to play him.