The End of the Democratic Party as We Know It, Part IV 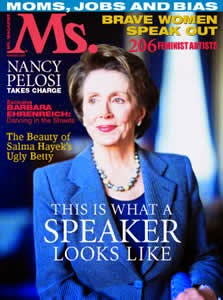 2007 looked much brighter with the Democrats back in control of Congress.  The big turnover in the House of Representatives showed that Democrats could still campaign on the local and regional level, but now we saw campaigns tailor made for the different regions of the country.  It was difficult to see how Nancy Pelosi, the new Speaker of the House, was going to hold this new majority together, but she seemed up for the challenge.

It was easy enough to rally around Hurricane Katrina, which had devastated the Gulf Coast.  The many deaths and slow recovery hurt the Bush administration, which appeared ill-equipped to handle the crisis.  Americans saw for the first time how badly federal domestic programs had been gutted.  The Federal Emergency Management Association (FEMA) had been rolled into Homeland Security and didn't have the funding to deal with the crisis on the ground.  As a result, many New Orleans residents needlessly died, and horrible conditions lingered for months afterward.

One of the first acts of the new Congress was to address this crisis with a major appropriations bill, but the $6 billion for hurricane relief paled in comparison to the $95 billion for the ongoing war efforts in Iraq and Afghanistan, which made you wonder where priorities lay.  However, the Democrats were able to attach a substantial increase in the federal minimum wage to the bill.

Unfortunately, the economy was in a tailspin with home foreclosures rising and a banking crisis looming.  Three years of a runaway economy had come back to haunt Republicans, who had pushed hard for deregulation and a lower prime lending rate to boost home sales, long seen as the primary mover in the American economy.  The deregulation actually stemmed back to the Clinton administration, who had freed up Fannie Mae, the largest home mortgage company in America.  Bank loan bundling was designed to lessen the burden of all the toxic loans, but now that lending practices were virtually unregulated, these bundled loans were bought and sold over and over again with the burden spread worldwide.

This kind of economic jerry-rigging had become the staple of both Democratic and Republican economic thinking.  We lived in a highly speculative market where you could make as much as 10 to 20 per cent on what were considered "safe" investments, resulting in one of the biggest economic booms since the 1920s.  But, like the 1920s it all came crashing down in September, 2008, with the worst banking collapse since Black Tuesday, 1929.  Blame was thrown everywhere, but the Republicans took the worst hit as they had presided in the White House and Congress during the boom. 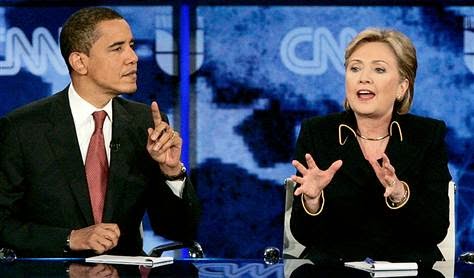 Democrats were torn between Hillary Clinton and Barack Obama in the primaries.  Neither offered any bold new ideas, but Obama seemd to represent the "clean slate" Americans were looking for.  Bill Clinton didn't do his wife any favors on the campaign trail, often looking like he was running for a third term.  Obama even quipped at one point, he wasn't sure who he was running against.

It seemed that Democrats badly wanted a return to the core values of the party in the fallout of the international crisis.  AIG, the world's largest banking insurance group, was particularly hard hit and required a  massive federal bailout.  The Bush administration engineered the Troubled Asset Relief Program, better known as TARP, but many felt Democrats were better suited to impose the type of regulations necessary to hold these banks accountable for the huge federal subsidized loans they were getting.  As a result, Obama not only won the national election but Democrats took commanding control of Congress.

There was great reason to celebrate, but the euphoria was short lived, as Obama brought many of the same figures that had previously served Bill Clinton onto his financial team, notably Larry Summers, who had promoted deregulation in the first place.  Despite all the malfeasance in the banking and home mortgage industry, no CEO was held accountable, and these lending institutions were the first to recover, while many Americans still remained in unemployment lines.

Rather than deal with this issue head on, the White House and Congress essentially chose to kick the can down the road, offering a number of stop-gap solutions that eased the crisis but didn't present any long term solutions.  This was particularly astounding given that Democrats had a filibuster-proof majority in the Senate when Arlen Specter switched parties in 2009 to support the health care bill being pushed through Congress.

There was no unifying message in the Democratic Party, members began to splinter off and form "gangs" holding bills hostage in committee until they got perks for their representative states.  We needed someone like Lyndon Johnson, who knew how to cut through Congressional gridlock and get bills onto the floor for a vote.  Harry Reid, the Democratic Senate Majority Leader, didn't appear to have the stomach to do it, and Obama was too new to know how to put the bills in order from least contentious to most contentious to better assuage rival interests.

Probably the worst example were the deals struck to assuage health care bill holdouts -- Joe Lieberman, Blanche Lincoln, Ben Nelson, and Mary Landrieu, among others.  Harry Reid had previously handed the bill to Max Baucus, Democratic chairman of the Senate finance committee, who sat on the bill for weeks, letting his good buddy Chuck Grassley, a Republican from Iowa, pour over it in an empty gesture of bipartisanship.   This infighting played out on national television, with the media jumping all over the "Nebraska compromise" that was reached to satisfy Nebraska senator Ben Nelson.  The end result was a health care bill that Obama had to squeeze down the throats of House Democrats, who had wanted a single payer system, to get the revised bill passed before the Republicans snatched away the Senate seat vacated in the wake of Ted Kennedy's death.

As a result of all this turmoil, Republicans seized the momentum in the 2010 midterms, overturning the House once again and making it all the more difficult to govern the country.  It seemed as if Democrats hadn't learned any lessons from the 1994 debacle.  They once again appeared rudderless, with Obama now forced into making compromises he was ill-advised to make, such as extending the Bush tax cuts for another two years to get a handful of Republican votes to overturn the "Don't Ask Don't Tell" policy in the military.  Once again, the Democratic Party was a political party in shambles.