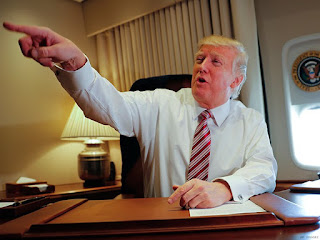 It's not surprising that a man with a very litigious past would find himself at odds with the federal courts so early in his term.  However, you would think he had lawyers who understood the Constitution enough to craft executive orders that weren't so easily shot down in court.  In fairness, he probably thought Jeff Sessions' boys knew the Constitution and trusted them when they drafted his "travel ban,"

It is an ideologically-driven executive order, not a Constitutionally-based one, using September 11, 2001, as its benchmark.  There is no specific act referenced that would explain why he chose to target seven countries that had absolutely nothing to do with 911.  He doesn't even mention the countries by name but rather refers to section 217(a)(12) of the INA, 8 U.S.C. 1187 (a)(12), which is a 2015 Terrorist Travel Prevention Act that was rushed through Congress and signed by President Obama in response to the Paris and San Bernardino attacks that year.  However, this Act, which Trump's lawyers use as a precedent, didn't physically stop persons from these countries to enter the US, but rather tightened security background checks on these specific foreign nationals.

I suppose if you are trying to convince your electorate of the need for a 90-day travel ban, this kind of  specious argument would fly, but you can't expect a Federal Appeals Court to be as easily convinced.  Trump of course was furious, so much so that he threatened to take his case to a "real court," by which we can only assume the Supreme Court.  However, there are still only 8 members on the Supreme Court, and at best the White House could only hope for a 4-4 tie, which isn't enough to strike down the Appeals Court decision.  Sorry, Mike Pence can't cast the deciding vote.

Trump's legal team beat a retreat for now, withdrawing in its den to write a new executive order that won't have so much questionable language.  However, it is hard to imagine they will do much better a second time around, as it will be pretty hard to remove the ideological blinders.  His administration is convinced of the moral imperative of such a ban, and is looking to create far greater restrictions on immigration.  Congressional Republicans want to cut legal immigration in half.  One can only assume the undesirables are seen as being predominantly Muslim, but the language will have to avoid a religious litmus test, otherwise these executive orders and bills will be shot down in court once again.

What is odd about all this is that Muslims represent a sliver of the American population.  By Census counts, Muslims represent less than one per cent of the population, and many of these Muslims are converts like Kareem Abdul Jabbar.  So, the actual number of Muslims hailing from a foreign country is much less.  Yet, we are led to think by the endless stream of memes on social media that there is this yuge existential threat that Muslims will take over towns, cities and even states with Sharia Law.

One town actually was taken over by Muslims -- Hamtramck, Michigan -- and so far there has been no significant changes in the local laws or the general pace of life for that matter.  But, the conservative blogs have jumped all over this, claiming that the newly elected city council started enforcing Sharia Law immediately.

It's a slippery slope because most of us have no idea where Hamtramck is, much less follow what is going on.  We take whatever information we get from sources we trust.  So, our views are reinforced one way or the other.  This is what the Trump administration is relying on.  They hope to make news as obscure, unclear and as unintelligible as possible so that we as Americans will have no idea which end is up anymore.  This is the road descending into fascism.

Fortunately, we still have the courts to block such efforts, but that doesn't stop His Trumpness from besmirching them and if given enough time stacking them in his favor.  He doesn't seem to have a very willing ally in Neil Gorsuch, who took offense to the President's characterization of the Federal  Appeals Court of San Francisco.

This should be a cue to Trump to lay off, but as we know The King of Orange is not one to back away from a fight.  He will take his case to The People's Court if necessary.  Lest we make too much humor out of this situation, we shouldn't forget that we have four very contentious years ahead of us and every battle counts!

Posted by James Ferguson at 3:15 PM