Meet me in Ljubljana 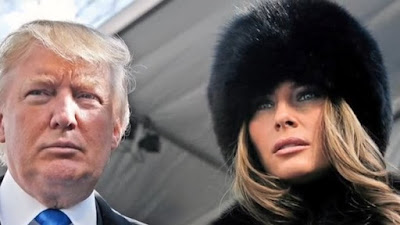 Call me prescient, as I had started a novella in December about an old man bumming a light from a young American at a cafe in Ljubljana and then spilling out a story about Melania being a deep cover Russian spy, who by a surprising stroke of luck ended up becoming First Lady.  I thought it was too far fetched to go any further and dropped it after a couple of chapters, but maybe I should take it up again, as this strange request by Vladimir Putin has me thinking he has a mole in the White House, not that Melania spends very much time there.

I've never been to Ljubljana but they tell me it is nice.  Slovenia managed to escape the Yugoslavian blood bath relatively unscarred.  It was the first of the former Yugolav republics to join the EU in 2004, and has enjoyed a steadily growing economy ever since.

Melania left her homeland before the break up, becoming a model in Italy and eventually migrating to the US on an H-1B visa, where she hit her stride in New York.  She met the Donald within two years of her arrival.  Trump helped her get a green card, thanks to her "extraordinary ability" as a model, and within a few years became his wife.

One can't imagine that Pootie foresaw all these things happening.  Hell, he wasn't even President in 1996 when Melania first came to America.  But, he was Deputy Chief of the Presidential Property Management Department, responsible for the transfer of foreign properties from the former Soviet Union to the new Russian Federation.  There is also that KGB past, which we know so little about, but one can imagine all sorts of things, including setting up deep cover agents in the US.  A practice that inspired the television series The Americans.

Trump had previously preferred blondes, but somehow Melania caught his eye.  As the story goes, they met at the Kit Kat Club, a theater that had gone under several names but was then being used for the popular revival of Cabaret.   Apropos, one might say.  The Donald was reeling from his separation from Marla Maples, so he probably wanted someone who didn't remind him of her, so why not a long-legged brunette with a thick Eastern European accent?

A lot of these deep cover agents were used to infiltrate the business sector, and Trump was the King of New York real estate, at least in his own mind.    He was also toying around with the idea of a presidential run on Ross Perot's Reform Party ticket.  So, he would have been a good score for a sexy spy.

Russia is always looking for useful idiots, and they seem to have found one in Trump.  A savvy young woman like Melania would have little trouble massaging the Donald's ego and getting him to do someone else's bidding.   One can even imagine Trump calling her his "little Ninotchka."  What I have found most amazing during the campaign and first weeks in the White House is how easily he is led by others, especially for someone who prides himself on being his own man.  All you have to do is flatter him and you have his ear.

It seems the Donald may finally be wisening up a little, especially given his unflattering poll numbers.  This is a man who wants to be loved, as old pal Howard Stern noted, and these bad ratings are killing him.  He desperately needs something to boost his presidential cred and it seems Vlad has come to help him out, offering a meeting in Ljubljana to provide his sagging presidency the gravitas it is sorely lacking.

For Melania it will be a homecoming.  Ljubljana is thrilled as punch to have one of its own in the White House.  So much so that local residents are brandishing their products with her name, which has caused some branding concerns.

It's too bad Spy magazine is no longer around.  They would have had a field day with this connection.