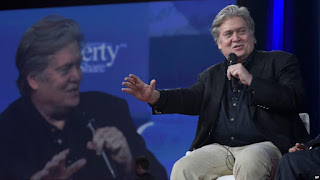 I was tempted to listen to the evil Dr. Bannon at the CPAC pep rally but pretty much knew what to expect.  CNN was literally dripping with anticipation last night as Bannon very rarely makes himself available to the public.  He's one of those that likes to lurk behind the scenes, whispering his demented thoughts into the ears of political leaders, kind of like CPAC itself.

Stephen Bannon is only slightly more acceptable than Sean Hannity and Alex Jones, who apparently also has the President's ear.  Bannon at least doesn't shout.  Unfortunately, the agenda is pretty clear.  Turn the notion of mainstream media on its ear, allowing for fringe media like that they represent to become part of the mainstream media.  At that point, listeners will be completely confused as to what is real and what is fake, as it will be competing with each other every night for their attention.  News will no longer have an ethical standard but will be judged by how many hits it gets on the social media.

It's pretty scary to think about, but this is the war on media that the Trump administration has unleashed.  He has revealed his list of acceptable media sources and not surprisingly CNN, Washington Post and the New York Times are not on that list.  They have essentially been blackballed.  Alex Jones already claims his inflammatory InfoWars has been invited to White House Press Briefings.  Who's to argue with him as he also claims that he and Trump are in constant communication?

The Conservative movement is currently in hyperdrive.  The time is now for their full frontal assault on American society, turning the public against the "corporatist global media" as Bannon calls it.  This would include Fox News and a number of other conservative corporate news syndicates, which own an alarming share of television and print media around the world, but Bannon wants everyone to know this is clearly a liberal cabal the Trump administration is fighting against.

Breitbart is kind of like Scientology.  It grew out of the ravings of a mad man and now has a cult of followers.  Bannon came to Breitbart after the founder's death in 2012 and quickly gained a far-reaching audience.  He had been a relatively successful investment banker and minor media mogul before that.  There was no way to imagine the kind of influence he would gain in 2016 when Trump made him head of his campaign.

Bannon regaled in all the wrong predictions and descriptions of their campaign in chaos, only to see the liberal media "crying and weeping" on election night.  Their electoral victory is their validation in his mind, and many many people believe this.  Certainly, the folks at CPAC, who like many conservative political action groups are now solidly behind Trump.

This really isn't much different than what went on in Germany in the 1930s.  Bannon, who has long championed white supremacy no doubt has a soft spot for Hitler.  One could argue that he is looking at this from a purely entertainment point of view, but the result is the same, he gave credence to white supremacy and other nationalist movements by constantly promoting them at Breitbart.

Of course, conservatives don't want to claim their ugly doppleganger.  Instead, they try to project this latent fascism on liberals and it seems to be working among their followers.  Why not?  It worked for Mussolini, Hitler, Stalin and other autocratic leaders.  Obviously, the evil Dr. Bannon has studied all this and distilled the essence into his twisted view of the role of media in shaping agenda.

If you incite enough riots and keep your minions relatively in check, most Americans will begin to identify with your message.  This is the long range goal of the Trump administration.  Berkeley was just a precursor.  It didn't turn out quite as well as expected, but they will go after cities and universities that are declaring themselves "sanctuary cities," and make them look like they are the radical ones.

Bannon knows that as long as Trump keeps the alt-right conservative base happy, Republican leaders will be too afraid to challenge him.  As unpopular as Trump is nationally, he is very popular among his base.  An estimated 87 per cent of conservatives support his actions.  No Republican leader is going to challenge numbers like that, except someone like John McCain, who has secured his Congressional seat for another six years.

We shouldn't think for a moment that these guys are stupid.  Alt-right spin doctors like Bannon know exactly what they are doing and they are successfully turning this country against itself.  It is hard to say what Bannon's level of convictions are -- whether this is all part of some Dominionist plot to plunge the country into chaos or just simply a means of attaining power and control.  Whatever the case, he is looking more and more like Negan on Walking Dead.  He will use whatever means at his disposal to secure that power in an autocratic state.

In that sense, he's not much different than Dick Cheney either, who tried to do the same in the Bush White House until his old ticker began to give out.  Cheney had outsized influence during the first term, calling many of the shots in the White House.  It was only when things began to deteriorate in Iraq that Bush lost faith in his partner, and sought advice from others.

However, Cheney and like-minded conservatives had successfully put an apparatus in place that would allow future conservative regimes to consolidate a disproportionate share of power in the executive branch.  This is Homeland Security, which has a tremendous amount of authority.  Obama warned us of this, but no one seemed to take note as Obama was relatively benevolent in his use of this power.

It is clear from the first few weeks of Trump's administration that he will not be so benevolent, using the full extent of his executive authority to push through an alt-right agenda, largely contrived by the evil Dr. Bannon on the campaign trail.  Of course, CPAC and other conservative groups had a hand in it too, but it is Bannon who has cobbled together a wide-ranging agenda of conservative favorite themes into a more or less coherent package that is being serialized through executive orders.  As such, the base of the Republican Party is thrilled as punch.  This is what they had been promised for the past two decades, ever since the GOP first presented its "Contract with America."

One can't say that Republicans don't lack patience.  They have kept to their agenda for the past 6 presidential administrations waiting for the propitious moment when they could finally enact it on a large scale.  They had to content themselves with small victories at the state and national level during this time, but now all the forces appear to be in place for the final push.  All we can hope for is that there will be sufficient enough reaction against this agenda in the next two years to reclaim at least one chamber of Congress in 2018, otherwise we could be in for a very long winter.
Posted by James Ferguson at 9:04 AM