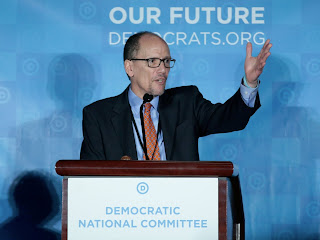 Looking at the other side of the aisle, the Democrats have a new party leader in Tom Perez.  I don't know much about him, or whether he will unite the fractured party, but first signs seem to be positive.  He immediately made Keith Ellison, his rival for the position, deputy chairman in an effort to unite the raucous crowd.

I also like that Perez said the party will focus more on down ticket races, rather than investing all this energy in the presidential race.  It really was amazing to me that the Dems were unable to retake the Senate given more Republican seats were up for grabs than at any time in the past 6 years.  They were only able to gain one seat.  Much too much money and energy was spent on Hillary at the expense of key Congressional races.

Personally, I was rooting for Keith Ellison.  His Muslim background had many Democrats questioning whether he was a wise choice.  Ultimately, it is a DNC leader's organizational skills that should be the focus and Ellison gets high marks here.  Perez is an unknown, having previously served as Obama's labor secretary, and never having run for elected office.  Ellison has run successful US House campaigns in Minnesota's fifth district since 2006.

Perez represents a decided tilt toward Hispanic voters.  He also has an excellent civil rights record, which should help placate the liberals that were behind Ellison, as he enthusiastically threw his support behind Perez.

This would normally not get so much attention, but the Democrats' poor showing last November has placed a lot of focus on the party leadership, which Sanders' supporters felt unfairly aided Hillary in the primaries.  The DNC was forced to clean up its act after the allegations were verified by leaked e-mails.  For Sanders' part, he wants to see the Democratic Party come together and push an agenda that favors the working class in this country.

Perez would like to return the party to its grass-roots base of 2008, which vaulted Obama to the presidency with a Congressional majority in tow.  Ellison was looking to build off Sanders' momentum in 2016.  It seems the Clinton era is finally over with Donna Brazille getting booed off the podium after announcing Perez's victory.  Brazille had been a close ally of the Clintons for decades.

I imagine the Clintons think they can still exercise some influence over Perez, but I'm not so sure after hearing his speech.  A bit too strident for my taste, but it is clear he wants to steer the party in a new direction.

The real test comes in 2018 with the midterm elections.  It is crucial that the Democrats respond to Trump and turn over a highly unpopular Republican Congress, which appears frozen at the moment as to what direction to take, especially in regard to the Affordable Care Act.  Now that he is out office, Boehner took a broader view on the battle over health care.  It will be a tough fight for the Dems to retake the Senate, as only 8 Republicans are up for re-election, whereas 23 Democratic seats are at stake.  Republicans have set their sights on 10 of those Democratic seats.  Looks like Perez will need all the help he can get in what promises to be a very vicious election cycle.
Posted by James Ferguson at 1:37 PM