The Night He Drove the Grand Ol' Party Down 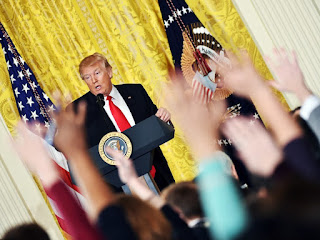 It was a pretty simple thing to do.  Just go in front of the press and announce his new pick for Secretary of Labor, say a few complimentary things about him, and quietly bid adieu.  But, His Trumpness wasn't going to let it go at that.

The first indication this was going to get messy was all of his handlers preceding him, but no sign of "Alex" Acosta.  They all dutifully sat in the front row to give their president emotional support.  I had thought Trump would stick to theme, as he initially spoke so calmly.  I tuned away only to come back twenty minutes later to hear him ranting about the classified information that had been illegally leaked out of his administration.  Not just the leaked phone calls of Mike Flynn, but that of his conversations with the Presidents of Mexico and Australia, all of which he claimed were misrepresented in the press, or to use his phrase, "real leaks, fake news."

It was clear to everyone his conversation with President Pena Nieto went off the rails, as has been everything concerning his relationship with Mexico, since he tweeted it himself!  Nieto tweeted in return as this now seems to be the official line of communication with the White House.  Whatever occurred in "private" only reinforced this deep chill in relations, as Nieto is having to defend himself against the public outcry back home.

The Prime Minister of Australia was more conciliatory, saying His Trumpness didn't hang up on him, but chose not to elaborate, indicating a rather chilly call over the 1250 refugees.  Trump tweeted he was very upset over the "dumb deal" the Obama administration had struck last year.

In regard to the disgraced General Flynn, he basically lauded his actions, saying he would have directed Flynn to contact Russian leaders if the former general had not done so on his own volition.  Trump's only qualm, apparently, is that Flynn wasn't forthright with Vice President Pence.  He blamed the media for blowing the story out of all bounds and forcing him to have to ask for Flynn's resignation.  A rather strange admission to say the least.

His Trumpness was only warming up.  He launched a full scale attack on the media, CNN in particular, as purveyors of fake news.  When the more audacious reporters challenged him, such as his claim that he had the biggest electoral victory since Reagan, he retreated ever so slightly, claiming that was how it was presented to him.  Not his mistake mind you, but one of his handlers.  You figure it was probably one of those sitting on the front row who he was glaring at.

The creme de la creme of the evening came when a black reporter asked him if he would include the CBC in discussions of his agenda for addressing urban policy.  Oblivious to what the acronym referred to, he asked her to set up a meeting for him.  She was referring to the Congressional Black Caucus.  Mind you, this is a guy who claimed he would win 95% of the black vote in 2020.

Of course, CNN had a field day with the press conference afterward, as did all the other networks.  Surprisingly, it was Shep Smith of Fox who was the most animated, castigating Trump for his demonstrable lies.  No wonder Trump limited his praise of Fox to the syndicated morning show, Fox and Friends.

On CNN, one commentator opined that the Trump administration was missing Hillary, as she had been such an easy target.  Hala Gorani noted that he evoked her name 6 or 7 times during the press conference, but that it was obvious the media was now his central target.  That and the judiciary, the commentator noted, although he did not believe Trump's attack on the judiciary would earn him the public's favor.

The King of Orange also lambasted the New York Times and Washington Post for leaking the leaks from his White House, calling it false reporting.  How can something be false if the leaks were real?  I suppose he meant to say that the Times and Post shouldn't have published these leaks out of deference to his administration, but what if any deference has he given to these journals?

The more he attacks the media, the more the media comes back at him, leading one to suspect this is what he wants.  It seems to play well with his constituency, which gets its news primarily through the social media.  Trump has set up a highly divisive atmosphere, which led Charlie Daniels to opin "it's only a matter of time before there is blood on the streets," evoking the Civil War in a very strange commentary for the Cybercast News Service, or CNS News as it likes to call itself.  It is unclear in that missive who Daniels is blaming for this discord, but it is safe to say it is not Trump.

Trump has created a wall that runs right down the middle of the country.  One he plans to exploit with "campaign-like" rallies to take his message to his people.  Both sides have dug in their heels and are preparing for rhetorical war, which hopefully will only result in bruised egos.  Obviously, it was a big blow for Trump to lose Flynn and Puzder in the same week.  He had barely survived an attack on his Secretary of Education last week.  His designated EPA chief is also under fire.

If Trump was the conciliatory man he claims to be, he would have picked an experienced, moderate Republican like Alexander Acosta to begin with, not a pathetic fast food mogul, whose idea of labor is having pin-up models like Kate Upton fake an orgasm over his burgers.  This is not Celebrity CEO Apprentice.  It is his duty to pick qualified individuals to lead his cabinet.  Unfortunately, the Republican Party stood ready to ram Puzder through anyway, until it looked like they would be one or two votes short and couldn't count on Mike Pence to break the tie.

The GOP doesn't seem to realize that Trump makes them look every bit as foolish by not challenging him.  I understand they are afraid the underbelly of their party will turn on them in the upcoming midterms, but surely there are enough moderate Republicans and Independents out there to counter the redneck vote!  What happened to the Party of Reagan and Eisenhower and Teddy Roosevelt?

Instead, Trump pays deference to Andrew Jackson, a Democrat who he obviously hasn't read anything about much less understands.  Morning Joe called Trump out on this highly questionable affection for Jackson in the midst of his rant on Stephen Miller, one of Trump's handlers present in the front row.

At what point has Trump gone too far?  For many it was this press conference, but it remains to be seen how the once Grand Ol' Party will react.