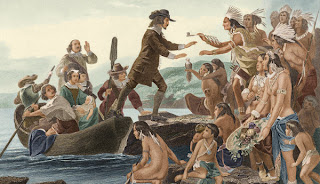 I was perusing the Internet bookshelves for something recent and fell upon this book on Roger Williams.  It has received favorable reviews far and wide, as it places Williams at the center of the battle over free will.  In many ways, Williams appears to have beaten Thomas Paine to the punch, in his determination to defend civil liberty,

In several publications, he argued that the individual conscience should not — could not — be governed, let alone persecuted. If God was the ultimate punisher of sin, it was impious for humans to assume his authority. And it was “directly contrary to the nature of Christ Jesus . . . that throats of men should be torne out for his sake.”

This book explores Williams and the world he was a part of in the mid 17th century.
Posted by James Ferguson at 9:24 AM