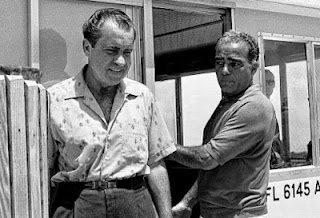 Just when you think there couldn't be any more dirt left to dig up on Nixon, Don Fulsom comes out with a new book, Nixon's Darkest Secrets, which paints Tricky Dick in the worst possible light,


The President's closest colleagues complained at the way Rebozo monopolised Nixon's time. General Alexander Haig, his last chief of staff, is said to have imitated Rebozo's 'limp wrist' manner and joked that Rebozo and Nixon were lovers.


Fulsom explores the unusually close relationship between Nixon and Rebozo, calling Nixon's 53-year marriage a sham.  Seems we have another Nixon movie on the near horizon.

Posted by James Ferguson at 9:59 PM