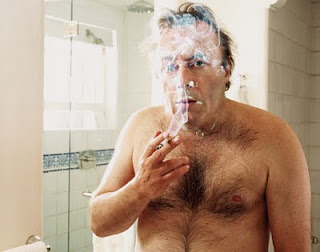 Christopher Hitchens loved his booze and cigarettes.  He felt that it gave him an edge when it came to writing copy.  Charlie Rose had Salman Rushdie, Martin Amis, Ian McEwan and James Fenton on the other night discussing this and other aspects of Hitch's life.   They all spoke very warmly of him, especially Amis, who was one of his dearest friends.  Hitch apparently liked to tease him in saying that they had an unconsummated gay marriage.  Fenton noted Hitch's incorrigible "flirting" and the way he liked to entertain opposing views.  His Washington parties would have persons from across the political spectrum.  He loved being in the thick of things, among those who shaped policies, but at the same time would fly over at a moment's notice to be with one of his friends when he needed him.  Rushdie noted that Hitch stood by him throughout the fatwa ordeal and defended him against Le Carre when the two of them had their big row.  They all said he made a big mistake in supporting the Iraq War, although they didn't get much into his so-called "power of facing," and how he tried to link his "awakening" with that of Orwell.   But, in the end he redeemed himself and became the darling of the liberal media once again.  Of course when he writes articles like this one on self-improvement, how can you resist?
Posted by James Ferguson at 9:21 AM