The Politics of Science

Bill Nye finds himself in another debate, this time with Tennessee Republican Marsha Blackburn over climate change.  It seems Marsha took a few pointers from Ken Ham, finding a handful of "scientists" who reject climate change, but David Gregory wasn't a passive moderator in this debate, often challenging Blackburn himself.  Mercifully, this debate clocks in about 13 minutes, as opposed to the two-and-a-half hour snoozefest that was the Creation Debate.

I think Bill has learned by now that science is not really at issue here, but rather politics.  For whatever damn fool reason the Republicans have lined themselves up on the opposing side of just about every issue confronting this country.  They don't so much approach these issues in a scientific spirit but rather a litigious one, pulling up a few specious claims and statistics that cast what they consider to be "reasonable doubt."

As David Gregory noted, most Republican leaders accept climate change is occurring, they just question the economic cost in doing something about it.  However, Marsha takes the maximalist position denying that there is any climate change at all, and that what we are experiencing are just fluctuating weather patterns.  She also notes that the massive increase in cost from recent natural disasters is mostly due to population growth and redistribution.  She cited a few detailed figures to make it look like she actually researched the topic, but one doesn't sense much confidence in her voice.  These lines were obviously fed to her, and this time around Bill Nye had little problem picking them apart. 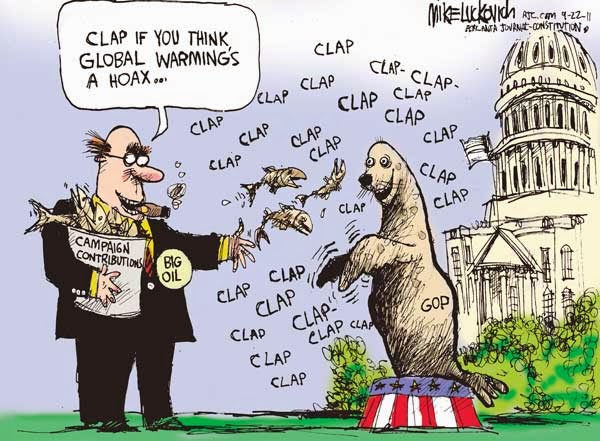 Nye singles out the most obvious culprit, Big Oil, who drops a lot of money in Republican political campaigns, and obviously it is not in its economic interest to see the country move away from carbon-based energy sources.  Although tracking the sources of these contributions has become increasingly difficult, with the rise of so-called dark money.

As you can see from Blackburn's latest fundraising efforts, automotive, oil and gas industries figure prominently in her campaign contributions, but many of her other contributions are probably masked through third-party groups.  However, this doesn't explain why so many persons buy into these conterfactual opinions.  What is it about the make-up of the conservative electorate that refuses to accept scientific research?

In a recent Pew Research Poll, nearly 60% of Republicans refuse to accept Darwin's theory of natural selection, whereas nearly 70% of Democrats do consider Darwin's theory legitimate.  Less than five years ago, the numbers were relatively equal, indicating a major shift since the rise of the Tea Party in conservative politics, which has been actively promoting Creationism and climate change denial. 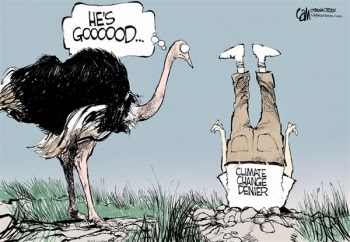 This seems to bolster a long standing argument that conservative industries are using the Tea Party as an ideological strong arm to bully Republicans into a narrowly-defined vision of society.  Creationism and climate change denial have become part and parcel of a new ideological-centered political party that caters to an overwhelming religious conservative voter base.  Faith and reason can no longer be seen in parallel, but rather in opposition to each other, especially scientific reason.

I suppose at the base of this seemingly anti-intellectual movement is a strong desire for the moral certainty of the Bible as opposed to the moral ambiguity of science, especially when it comes to matters such as stem-cell research.  The religious right wing is steadfastly opposed to the use of embryonic stem cells, and for all of George W. Bush's administration such research was basically put on hold in America, allowing other countries, such as Japan, to make major breakthroughs in this research.

When it comes to climate change, the only type religious conservatives appear to feel comfortable wtih are divine acts such as the Great Flood.  They may look for signs of an approaching apocalypse, but certainly not form scientists, who they seem to regard with the same contempt as they hold for liberal academics, who have been vilified in the conservative media.

So, much like the Creationism debate, Bill Nye found himself engaged in a couple weeks ago, he is mostly preaching to the choir when it comes to climate change.  However, in this case Bill Nye is right.  Our unwillingness to accept climate change and respond accordingly is holding our society back.  The US has long stood at the forefront of technological innovations, and here is a golden opportunity to redefine the way we produce energy, yet we have allowed ourselves to be held hostage by oil companies, much the same way the whaling industry controlled sperm oil in the 19th century before the country eventually switched to kerosene.
Posted by James Ferguson at 2:40 PM