When MADD (Mothers Against Drunk Driving) pushed for stricter drunk driving laws, raising the minimum age of drinking and stricter alcohol policies back in the 1980s, there was some protest but most states followed suit.  The federal government even went so far as to hold back transportation funding to states which didn't raise the drinking age to 21.  One can argue if the decline in teens driving deaths is the direct result of these efforts or not, but obviously most Americans felt something had to be done and something was done to curb the number of deaths each year.

Here we are at another crossroads.  Mass killers typically target schools, yet we don't see the same kind of action taking place in regard to high-powered hand guns and rifles, which are the weapons of choice for these mass killers.  Instead, we see the same hand-wringing from politicians who don't won't to upset their pro-gun constituencies who see any imposition on gun ownership as an infringement on their second amendment rights.  "Joe the Plumber" went so far as to say "your dead kids don't trump my Constitutional rights."

Joe's callous dismissal was in response to Richard Martinez, the most outspoken of parents who lost their children in the latest shooting spree.  Martinez has demanded politicians quit posturing and take action.  It seems to be working because the normally inert House of Representatives approved more funding for background checks (roughly $20 million) in the wake of this latest tragedy.  A sign that politicians are beginning to worry about the fallout of these mass shootings. 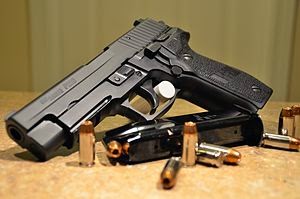 Still gun rights activists point to psychotropic drugs and other factors as the prime motivating reasons behind these shootings, unwilling to accept that ease of access to such high-powered weapons as a Glock 34 and Sig Sauer P226 is what gave Elliot Rodger the sense of "empowerment" he needed to pull of his "Day of Retribution." It's enough to make any parent mad as hell over the out of control "gun culture" we have created in America, except for  someone like "Joe" Wurzelbacher, who believes he has the "responsibility" to protect his family by any means necessary.

What's interesting is that less than half of Americans claim to have a gun in their house, yet the sale of guns has risen sharply in recent years.  Either families are keeping their guns secret or individual arsenals are growing dramatically.  It seems to be the latter.  Currently, there are over 300 million guns in distribution in the United States, many of them unregistered, as only the initial transaction needs to be recorded.

There probably wasn't anyway to stop Elliot Rodger from buying his pistols under current laws.  He did so legally, accumulating his arsenal over a substantial period of time so as not to call attention to himself.  Glocks and Sigs don't come cheap, nor did the 400 rounds of ammunition.  Laws only go so far in curbing violence like this.   What has to stop is all this incendiary rhetoric that ignites passions when it comes to gun ownership.

Owning a gun is a privilege not a right.  At one time the NRA promoted responsible gun ownership, encouraging registration, background checks and proper firearm training.  However, in the past three decades it has swung sharply in the opposite direction, spending a great amount of money and energy lobbying against what it regards as anti-gun legislation, and has even managed to gain the ear of the US Supreme Court, which evoked the second amendment to strike down DC gun control laws in 2008.  A decision that has had far reaching consequences.

The odds are now stacked against parents who would like to see tougher gun control legislation.  It seems that in our self-induced state of paranoia (mostly out of fear of post-apocalyptic zombies) we have created a gun culture which has swung wildly out of control with the number of mass shootings having risen three-fold in recent years.  At least 12 such incidents took place in 2013.  Open gun and Stand-Your-Ground laws have turned disputes into homicides.  There are an estimated 30,000 gun-related deaths per year, roughly the same number as automobile-related deaths.  Homicides account for at least one-third of these gun-related deaths.

Yet, gun rights groups would still like people to believe that guns are the innocent bystander here, not the victims of these crimes.  Guns do kill people!  Far more efficiently than do any other weapons, which Elliot Rodger noted in his manifesto.