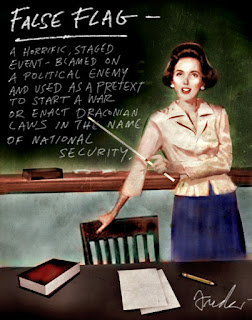 It's a rare day when a conservative radio talk show retracts a statement much less what he regarded as a "major story," but Alex Jones did just that.  He has apologized for spreading the inflammatory "pizzagate" conspiracy theory that had actually drawn former National Security Adviser Michael Flynn into its web.  We are still waiting on Jones to drop his long standing view that Sandy Hook was a "false flag."

These faux news outlets are coming under increased scrutiny now that we have a President who draws heavily from them.  Trump's wiretapping claim was pulled from Breitbart, and Spicey spread a story aired by Judge Nap that Obama outsourced surveillance on Trump Tower to the UK Government Communications Headquarters.  Fox News later took action against Judge Nap for spreading a false story.

The basis for much of this fake news emanates from Russian and Eastern European sources.  Some of it is child's play like these Macedonian kids who were taking advantage of the gullibility of Trump supporters to score hits on social media, hoping to draw advertising dollars.  But, the UK outsourcing story emanated from RT, or Russia Today, an English propaganda news site sponsored by the Kremlin.  Once these stories get picked up it is pretty hard to shake them, as they are shared widely through social media and picked up by news commentators to provide credence for their opinions.

What makes the wiretapping story particularly noxious is that it was given credence by the White House.  While some Republicans are questioning Trump's grasp of reality, no Republican has yet to accuse him of lying.  I suppose if the story first came from Mark Levin, Trump isn't lying but rather spreading an erroneous story, which Spicey augmented by referencing Judge Nap's additional accusations.

Rather than disown the story,  Trump stated he was "somewhat vindicated" by the report Congressmen Devin Nunes gave him that some members of his campaign team were the subject of "incidental surveillance" after the election.  Trump had specifically accused Obama of tapping Trump Tower before the election.

I seriously doubt we will ever get an apology from Trump.  Chris Wallace pressed Reince Priebus on the matter, and Trump's chief of staff adamantly stated that they don't accept the findings of the FBI chief on the wiretapping.  In their minds, Mark Levin's unfounded story stands.

This makes Alex Jones a better person than Donald Trump as he was finally able to let one of his conspiracy theories go.  That had to be a bitter pill to swallow for a man who has only two entries in the correction section of his website.