"Nobody knew health care could be so complicated." 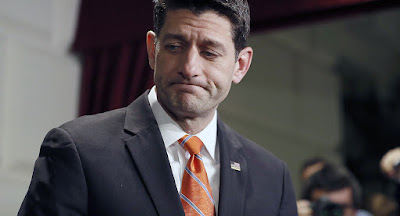 It's been a another rough month for the Donald.  This Presidential thing isn't working out quite like the flamboyant one thought it would.  Granted, he wasn't too keen about the health care bill GOP Congressional leaders were offering, but he threw his support behind it, even tried to strong arm wavering House Republicans into accepting it or face the consequences at the polls.  Anti-climactically, the bill couldn't even get through committee, leading Trump to tell Ryan to pull it from a floor vote so that was spared the ultimate indignity for "Trumpcare."

This is what happens when you have no game plan but rather try to do things on the fly.  Of course, Trump can blame Paul Ryan, which I'm sure he will do, as he is the one who came up with this noxious health care plan that no one wanted.  Only 17 per cent of Americans showed support for it, and it is highly doubtful any of these persons knew what was in it.

Republicans had been met by raucous town halls in their Congressional districts, demanding they come up with something better or leave Obamacare alone.  Too many persons have come to rely on the current affordable care act to have it gutted the way Ryan and his Republican cronies wanted to do, essentially dressing up a trillion dollars in tax cuts for the wealthy as a health care bill.

One would like to think that the veil has been lifted and conservative voters will finally realize they have been had, but it is unlikely that is the case.  Trump still has an approval rating in the high 30s, which means most rank-and-file Republicans continue to support him despite what has been a horrid two months in office.

His attempt to establish a travel ban on predominantly Muslim countries was shot down again.  This time in a Hawaiian federal court, leading many Trumpkins to voice their indignation at the Aloha State rather than a President who doesn't know how to write an executive order that sticks.

It takes months to prepare an executive order.  It has to be run through any number of legal experts to see if it will hold muster in a federal court.  Still, there are no assurances, as former President Obama found out several times.  The Constitution is the Holy Grail of our American legal system.  Even Neil Gorsuch believes himself bound by it, although his "textualist" approach to the Constitution is deemed heartless by some.

Paul Ryan tried to brush off the raucous town halls, believing Republicans would fall in line behind his bill.  Unlike the Affordable Care Act that went through any number of agonizing revisions, the American Health Care Act was presented as if handed down from up high in tablet form and no one should question it.  But, House Republicans weren't too anxious to face the wrath of their Congressional districts with elections coming up within a year and doubted its legitimacy.  Ryan could barely hide his contempt.  He tried to strong arm wayward Republicans only to find opposition grow.  So, he enlisted Trump to take the GOP health care bill on the road, only to find the Donald was more interested in the latest Mack truck than he was so-called "Trumpcare."

There was no easy answer, as Trump himself proclaimed, which may explain his reluctance to enthusiastically sign onto this stinker of a bill.  Republicans were essentially forced to come up with an alternative, when many wanted to do away with subsidized federal health insurance all together.  The bill called for massive cuts in Medicaid and Medicare that would have left the most disadvantaged Americans shit out of luck.  The CBO estimated as many as 50 million Americans would lose their health insurance as a result of this bill.  How could Trump or any Republican Congressperson explain this to his or her constituency?  For the moment, Democrats can gloat as Hillary is doing in this epic fail by the new Republican administration.

While some Republicans may be holding their heads down in shame, there will be a round two.  They didn't work this hard to gain control of all branches of federal government only to see Obamacare become "the law of the land."   Most likely they will wait till the new fiscal year to find ways to defund it.

Of course, it is convenient this way as Republicans can continue to blame the Affordable Care Act for rising premium rates.  This had proved a very effective campaign mantra the past 6 years.  But, having failed to get an alternative bill through their own Congressional committee it is going to be hard to push this issue once again on the campaign trail.  More likely they will press ahead with tax cuts and try to pretend this ugly little chapter never happened.  A somewhat humbled Trump seems quite prepared to move on from this debacle.