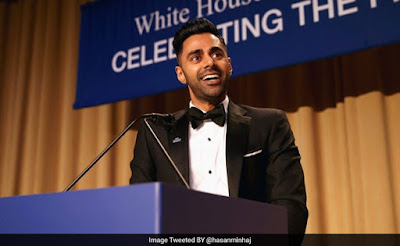 It took a while for Nicky, I mean Hasan Minhaj to hit his stride but when he did he had some good jokes, mostly directed at the White House Correspondents Association itself.  Donald Trump was reduced to an elephant in the room as he decided to hold a rally in Pennsylvania, which David Gergen called a "deeply disturbing speech."  And so we mark 100 days.

Hasan prefaced his monologue by saying he was the only person who would do it.  Everyone else had backed out.  There was a time Alec Baldwin might stand in for the President, but it seems Alec is tiring of this impression as there is only so much you can do with a caricature.  Twenty-five minutes is a long time to stand in front of a cynical bunch of journalists and try to make them laugh.

There were few celebrities on hand.  There was absolutely no one from the White House administration, not even Sean Spicer, who fields the White House correspondents every day.  Panning the room, the only recognizable faces were news celebrities like Wolf Blitzer.  The camera eventually did find Darrell Issa, who laughed when Hasan made a joke about the news media being treated like a minority.

The WHCA was clearly on its own and had to fend for itself.  Hasan tried to encourage them by saying the news media had to rebuild trust with its audience, going after CNN as well as Fox, the two biggest providers.  He joked that it felt like CNN was giving him homework not news, by asking whether he thought there was a Russian connection in the Trump administration.  "I don't know?  I'm watching the news.  You're supposed to tell me!"  He later quipped that when a journalist speaks, he speaks for all the press. "Just think about that?  Right now Geraldo Rivera is out there speaking for you."

It is odd that no one representing Trump was on hand for this annual gala.  This was the clearest sign of the firewall the Trump administration has put between itself and the press.  The last President to skip a Correspondents Dinner was Ronald Reagan 36 years ago, and that was only because he was recovering from an assassination attempt.  George W. Bush sat there and took the thinly veiled rebuke he was given by Stephen Colbert in 2006.

I guess His Trumpness feels he goes through this every night so he decided to spend the evening with his loyal fans in Harrisburg, PA, where you guessed it, he assailed the press.  This is the equivalent of firing a warning shot at Syria or dropping a bunker buster on Afghan caves.  It went over well with his loving audience, because as Hasan pointed out, they trust him.  It doesn't matter what the media says at this point, Trump has the unquestioning support of his political base.

Trump made no attempt to reach out to a broader audience.  This was a visceral campaign rally, repeating virtually all the same themes he has done for the past two years.  He views his election as the ultimate repudiation of the news media despite losing the popular vote by 3 million.  All that matters to him is that he won, and the mainstream news media lost.  Through it all, the audience cheered "CNN sucks!"

Poor CNN has come to represent the "lamestream media" in the minds of his conservative base.  You can't go into an airport or pretty much any public place that has television monitors without seeing CNN.  Yet, for the most part CNN has been kind to Trump continuing to offer paid slots for his surrogates when it is definitely not on its best interest to do so.  In fact, it is this split personality of mainstream media outlets that has eroded trust.

It isn't so much balanced reporting that the news media is trying to offer, but rather a venue for staged arguments and angry retorts that have become the staple of nightly news.  Pitting Kayleigh McEnany against Van Jones is sure to make sparks fly.  Just look at this segment following Trump's victory, as protesters gathered throughout the country.  CNN continues to follow the same format five months later.

When you look at Kayleigh's resume, you see why CNN hired her.  You would think that someone with degrees from Georgetown and Harvard, not to mention a brief stint at Oxford, would be able to hold her own in an argument.  Yet, she relishes the opportunity to spread disinformation, relying on her poise and confidence to win over the audience.  Van doesn't stand a chance against this no matter how sound his arguments for obvious reasons.  So why is Donald so angry at CNN?

If CNN cut off his surrogates I could understand, but they just continue to bring on more surrogates to defend him.  On the same panel with David Gergen was Rick Santorum, who comes in at the 2:37 mark in this clip to defend Trump.

Santorum is not the most ardent Trump supporter.  What was interesting about Santorum's comments is that he said Obama had this way of talking down at people and that conservatives deeply resented this.  Trump, on the other hand, says exactly what the conservative base wants to hear.  The former Congressperson left it to the others to parse out his words.

Trump has become the embodiment of the former Tea Party Movement, appropriating it like he would a business and rebranding it as his own.  He speaks for the underbelly of America that feels it has been forgotten, whose ways have been tread upon, and whose freedom of speech has been squelched.  As such, this underbelly gives His Trumpness a tremendous latitude in which to move in, as opposed to the codified language George Bush often found himself employing to signal to his base that he was with them even if it may not sound like it sometimes.  "Compassionate conservatism" has given way to "bellicose conservatism."  As I understand from Rick Santorum, we have Obama not Trump to blame for this.

With Trump, there is no questioning where he stands even as the ground appears to fall out from under him as it did on his failed attempt to push an Obamacare replacement through Congress.  He is safe in knowing that his base will blame Congress or Obama, not him.

The news media doesn't have such luxury, as Hasan Minhaj pointed out.  It has been reduced to minority status, where it is forced to defend itself no matter how baseless the 3 am tweet coming out of the White House.  Hasan offered no answers to this dilemna other than to say we live in an Age of Lies with a Liar-in-Chief.  The only thing the news media can do is keep up the good fight.