The Ballad of Judge Roy Moore 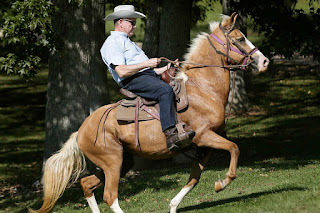 So, we have former Judge Roy Moore representing the Great State of Alabama in the United States Senate, assuming he wins the general election against Doug Jones, the Democratic candidate.  Moore rode into the polling station like the Lone Ranger, with putty gray cowboy hat and sunglasses.

One can only assume that Trump was forced to support Luther Strange, as that was probably Jeff Sessions' choice.  However, Trumpists in Alabama were solidly behind the Ten Commandments Judge, who kicked Big Luther to the curb in the special election primary.  I think even Trump saw the writing on the wall when he went down to the state with a banjo on his knee, giving what could only be described as a lukewarm endorsement for the interim senator.  He chose instead to rail against the NFL, "Rocket Man," and whatever else irked his addled brain.

Judge Roy came to fame in the early 2000s for placing a two-and-a-half-ton stone replica of the Ten Commandments in front of the state judicial building because he believes strongly in the "legal theory" of God's supremacy.  He published a pocket pamphlet on the subject so that other Alabama lawyers and judges could carry it around with them, like he does.  Not a day goes by when Judge Roy isn't asking himself what would God say on this subject.

Moore is the epitome of religious conservatism.  He defied Supreme Court orders to remove his ten commandments monument, leading to his ouster as Alabama Chief Justice in 2003.  He tried to run for governor twice and failed before being elected once again Chief Justice in 2012.  He quickly found himself in hot water with the Supreme Court a second time because of his refusal to recognize same-sex marriages, resulting in a second ouster in 2016.

No wonder the judge endeared himself to Trumpists, seizing his moment when Jeff Sessions took the job of US Attorney General.  Big Luther didn't stand a chance even with Trump on his side.  He mounted a lackluster campaign, hoping that support from state Republicans would put him over the top, but the best he could muster was 45 per cent of the vote.  Big Luther will get to sit in session until the end of the year, as the general election isn't until December.

As for Trump, He's already rallied to Judge Moore's side now that the preliminaries are over.  It's not like the Donald will get much of a black eye on this one, as Moore is much closer to his way of thinking.  At least that's what Steve Bannon and Sarah Palin told crowds in Alabama.

Big Luther will probably have to settle for early retirement, find a bank to sit on the board of back home in Alabama, or just raise his feet on the porch rails and take in the sultry Dixie air with a big glass of ice tea.

I don't think this race means anything unless Doug Jones is able to pull off an incredible upset in December.  There will be some opposition to Moore, who is woefully unfit to serve in the US Senate.  Moore lives in a religious fantasy world where he has to ride out to fight the masked bandits who would impose Sharia Law on this fair land, but alas many Alabamans probably think the same way.