Where in the world is Puerto Rico? 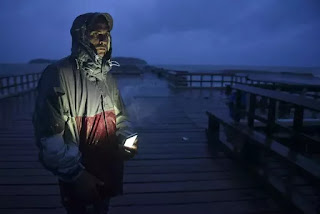 It's hard to know where to turn with all the competing headlines this past week, but somehow Puerto Rico remains the top story largely thanks to Trump's vacillation on lifting the Jones Act.  This delayed efforts to bring aid to the devastated American territory by other countries, who couldn't ship supplies directly to San Juan without heavy duties being imposed.

At first, Trump had a hard time locating the island, when pressed at a briefing with Spanish PM Rahoy, stating that it was difficult to get supplies to an island in the middle of the ocean.  Yet, as we should all know from geography class, Puerto Rico is part of a rim of islands in the Caribbean Sea.  Trump should know this since he has had real estate dealings on the island in the past, but maybe he thought a little "truthful hyperbole" might highlight how difficult it is to respond to the crisis?

He spent a full five days teeing off on the NFL and NBA, without a single tweet about Puerto Rico, which had been racked by not just Maria, but Irma as well.  It had been nearly three weeks since Irma first hit the island, leaving San Juan in the dark.  Maria delivered the knockout punch, resulting in 97% of the island being without electricity, and over half of the island without fresh water.

Yet, he couldn't bring himself to lift the Jones Act, citing opposition by shipping companies and Puerto Rico's massive debt.  This led to a torrent of responses on social media, the only form of media Trump appears to respond to, and on Thursday morning he lifted the Jones Act, a full three weeks after Irma first hit Puerto Rico.

Basically, he was shamed into responding to Puerto Rico.  I don't think he would have given it a second thought otherwise.  He will visit the island on Tuesday, nearly two weeks after it was hit by Maria.  Remember this is the same man who chastised Obama for not immediately visiting Louisiana last year when it was hit by a massive flood!  He and Mike Pence went down to the state to deliver toys to the kids.

It seems three hurricanes were just too much for Trump to deal with.  The first one was bad enough, and the second one hit close to home, Mar-a-Lago.  He figured his FEMA crew was on top of it so why bother.  He had bigger things to worry about, like raising money for Big Luther in Alabama.  Apparently, the GOP is actually worried that Roy Moore might not be able to carry the state in December. and even if he does he will only be a thorn in their side in the US Senate.

The problem here is mostly one of optics, as aid is getting to Puerto Rico, although not enough to deal with the magnitude of the crisis.  It just doesn't look good for a President to be strong-arming the NFL into getting its mostly black players in line, while the Hispanic island of Puerto Rico suffers greatly.  This so soon after his equivocal remarks on white supremacists in Charlottesville, which he  still hasn't fully distanced himself from.  His comments on the NFL may play well in Huntsville and help raise money for conservative PACs, but in the overall picture they don't help his or the GOP's image problem.

Worst of all, his comments illustrate how detached he is from what is actually going on around him.  He not only appeared completely oblivious to what was happening in Puerto Rico, but seemed to have no idea what was going on with the health care bill Republicans had been trying to steamroll through the Senate.  As late as Wednesday night, he still thought there was a chance to pass it, when two days before both Graham and Cassidy said they were dropping the bill in favor of tax cut legislation.  Trump told an Indianapolis crowd he had the votes to carry the bill in Congress, blaming the impasse on legislative procedures and Thad Cochran being hospitalized.  Both of which were patently false.

This is when those daily briefings come in handy, but apparently our dotardly president has no time to read them, as engaged as he is with twitter.  One assumes he is being informed of these events.

If all this weren't enough, it turns out his cabinet likes to jet around on taxpayers' expense.  This led to the resignation of Tom Price yesterday, who couldn't justify his outrageous travel costs.  But, he's not the only one, and it seems more heads will roll before all is said and done.  Price is an important figure, as he is the one who is supposed to be managing the Affordable Care Act.

With so many scandals surrounding his White House, it is easy to see how easily Puerto Rico gets lost.  But, Tuesday has proven to be an extraordinarily bad day for Trump, and his staff would have been wise to schedule his visit any other day.  They will have to be on their toes to make sure Trump doesn't stick his foot in his mouth any deeper than he already has.