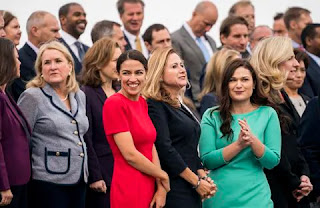 Apparently the incoming freshmen class of Democratic representatives is causing some consternation among the old guard, including those departing because they were unable to hold onto their seats.  A bitter Claire McCaskill vented her frustration at Alexandria Ocasio-Cortez, calling her a "shiny object."  Nancy Pelosi seems to think pretty much the same way, greatly reducing the scope of the climate panel that Alexandria championed and putting Kathy Castor in charge, rather than one of the new Democrats who pushed for a Green New Deal.

Why all this resistance to youth, which clearly drove the blue wave in November?  It seems that our elder, more experienced legislators have gotten very comfortable in their seats and don't like young upstarts who knock out 10-term Democratic incumbents in the primaries, as Alexandria did.  Basically, these old farts fear for their own seats in upcoming elections.  Unfortunately for them it may very well become a self-fulfilling prophecy if they choose to snub the incoming freshmen legislators.

The odd part is that Alexandria supported Pelosi, as did many of the incoming Representatives, even those who campaigned against her in the primaries.  It was better to accept the 75-year old House leader than risk a nasty civil war in the Democratic ranks when they need unity to challenge Trump in the White House.  Republicans did their best to encourage this civil war by offering to strike deals with Pelosi in exchange for their votes should she fall short among her own party members.  Fortunately, this ugly battle was avoided and it looks like there will be little resistance to Pelosi, but what does this say about the future of a party that is clearly in transition?

The Democratic Party is becoming far too liberal for Claire McCaskill and other Blue Dog Democrats, who made their career out of playing both sides against the middle.  McCaskill reminds me a lot of Mary Landrieu, who similarly went out in a huff in 2014, blaming Obama for her loss.  For decades these Democrats could only survive in red states by sucking up to the conservative base.

Not all conservative Democrats turned Republicans.  In states like Tennessee, Kentucky and West Virginia many remained party faithful but hold to a pre-1964 view of the party before the Civil Rights Act turned everything on its ear.  You will still find a lot of Blue Dogs in the Deep South as well.  They vote Democratic in local elections and even for the occasional conservative Democratic governor, but in national elections tend to go Republican.  That may be changing a little in the Age of Trump, as we saw in Alabama where Doug Jones shocked Roy Moore, but this turned out to be a one-off situation against a very bad candidate.

Hopes that the Democrats might pick up a Senate seat in Mississippi evaporated in the run off election where Cindy Hyde-Smith held off Ron Espy, despite all her Confederate baggage.  The funny part is that Cindy only recently became a Republican.  She just as easily could have been another Mary Landrieu or Claire McCaskill.

It's not so much that the Democratic Party is becoming more liberal as it is returning to its roots.  The freshmen class uses much the same language as FDR in promoting its agenda.  They hope to restore the kind of liberal democratic values that once made the party great.  Alexandria is not afraid to call herself a democratic socialist, a term the media insists on.  She wants to see the US have the same kind of social democratic system most European country have, so that we no longer have to go bankrupt over student loans and health care bills.

It's pretty basic really.  The New Democrats want the same system we had before Nixon privatized health insurance in the 70s.  University tuition costs also exploded during this time, despite the substantial public assistance and private endowments many universities received.  We can fund wars but not health and education.  This seems to be the take away from the past five decades.

We now have the largest military-industrial complex ever known to mankind replete with its own social safety net, yet when it comes to the average working person, it is every man, woman and child for his or herself.  Our concept of security has changed drastically since the 1960s.  We now seem to view military intervention in countries like Vietnam, Afghanistan and Iraq as insuring our way of life, while we raid social security to fund tax cuts for the wealthy.

It makes no sense, which is what Noam Chomsky has been saying all along.  Bernie Sanders picked up this theme in the 2016 presidential primaries and now we are seeing a new generation question the thinking that led to a massive national debt largely the result of huge tax cuts and a mammoth military defense system that has essentially made us the "policeman" of the world, much to everyone's chagrin.

I can agree with Trump wanting to pull out of Syria, as this is just another civil war in which we have no winning option, but here he is generating so much hate over a border wall with Mexico.  What we need is a consistent humanitarian view like Jimmy Carter tried to establish so that we will no longer have to act as the world's policeman to rationalize our military-industry complex.  We can put these same tax dollars and energy into rebuilding our decaying infrastructure, creating meaningful jobs by going back to the same Works Progress Administration (WPA) that provided jobs and badly needed infrastructure during the Depression.

Re-building roads and bridges, new forms of solar, wind, water and thermal energy plants, high-speed rail and other forms of new transportation will give this country a badly needed boost, rather than continue to fund overpriced fighter planes like the F-35, which cost a staggering  $1.5 trillion over 20 years.  It's a question of establishing the proper priorities.  Why can't Lockheed or Boeing put that same money and energy into building more fuel-efficient domestic planes?

The future is here whether we like it or not.  Alexandria is not so much a "shiny object" as a throwback to the values that once made America great.  We always prided ourselves on being a self-sufficient nation, able to pull ourselves up by the bootstraps and moving forward no matter the obstacles.  Sadly, we have sublimated this drive in our military.  What we need to do is harness that same energy to make ourselves a strong, resilient nation once again.  One we are proud to bequeath to the next generation.