Talking with the Enemy 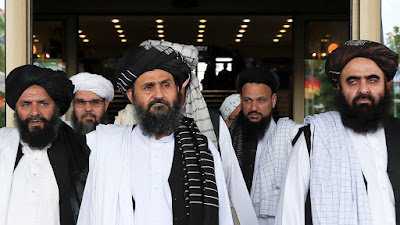 Will blunders never cease?  Anxious to be considered for a Nobel Peace Prize again this year, Donald J. Trump tried to not-so-secretly work out a peace deal between the Taliban and Afghan government at Camp David this weekend, only for someone in the White House to leak the news to the press.  Determined not to have any more egg on his face, His Trumpness claimed he called off the secret meeting, "unbeknownst to almost everyone" because the Taliban took credit for a recent car bombing in Kabul that killed an American soldier.

It's not clear whether the Afghan government was aware of this meeting.  President Ghani was scheduled to be in Washington this week, but no mention of meeting with Taliban representatives.  The Afghan President has been shut out of negotiations between the US and the Taliban that have been going on since November of last year.  Trump is determined to reduce the number of American troops in the country but the US military wants assurances from the Taliban that it will quit trying to claim more territory and end their terrorist assault on Kabul.

The irony of this secret meeting is that it was just days before the annual remembrance of 911, which was the reason we went into Afghanistan, as the Taliban was harboring Osama bin Laden and al-Qaeda.   At the time, they were led by One-Eyed Omar, who went to meet his maker in the sky back in 2013, after 12 years of relentless war with the infidels.  Turns out the wily Mullah wasn't hiding out in Pakistan as our vaunted military intelligence thought, but lived next door to US bases where he could enjoy the fireworks.  Six years later, the Taliban is stronger than ever, in control of a big chunk of Afghanistan much to the chagrin of NATO forces, which have grown weary after 17 years of war.

Like our previous longest war in Vietnam, our nemesis gets a lot of support from the North, namely Russia.  Putin was never happy with the war.  He had warned Bush against it, and only begrudgingly agreed to provide logistical support back in 2002, when he was still relatively new on the job.  He has since grown very weary of the US presence next door, and now seems to be providing logistical and military support to the insurgence.

If Trump is really trying to work out a deal with the Taliban, this would only favor Putin, who prefers to work with armed thugs as we have seen in Chechnya.  It certainly won't benefit the Afghan government we worked so hard to install, as they would be virtually defenseless against a Russian-backed Taliban.

Admittedly, it is frustrating that the Afghan government has failed to build any kind of military capable of fighting the Taliban on its own.  At least in Iraq, the defense forces proved sufficient to regain much of their lost territory from ISIS, but then they had some help from Iranian and Kurdish forces, who badly wanted to end the reign of the rogue Islamic state, or Da'ish as it is called in Arabic.  The Taliban is homegrown and has deep roots in Afghanistan, so it is much harder to fight, as the US and NATO have found out the hard way.

I suppose some kind of compromise is necessary at some point, but why on earth would you recognize their leadership by inviting representatives to Camp David?  These are negotiations that should be carried out through a third party, not directly as the US has done.  Trump has given the Taliban the recognition they have long sought.

His Trumpness seems to think he has this great charisma that allows him to seal a deal by his presence alone, hoping to unveil a peace plan ahead of the Afghan president's arrival in Washington that would make him look like the greatest negotiator of all time.  Instead, he was forced to call off a "secret meeting" because a) the news was leaked ahead of time, or b) the angry Afghan president cancelled his flight, or c) it was just a figment of his imagination.  Anyway you look at it, this will go down as another major foreign policy blunder, like the many that have characterized his abysmal administration.