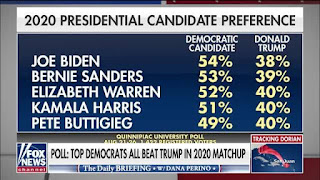 Before Dorian bore down on Alabama, Trump had other bad news to contend with.  As it stands now, the Democrats could probably run the Hurricane Whisperer against Trump and win.  It's gotten so bad that not just liberal pundits, but former conservative allies are concerned over the mental health of His Orangeness.

Trump has done himself no favors.  On top of his international altercation with Denmark over his proposed acquisition of Greenland, he had another horrid G7 conference in which he continually pressed for the readmission of Russia while skipping a key meeting on climate change.  This while the Amazon burned in epic proportions.  Making matters worse, he took the side of Brazil's demented president in the highly public spat between Bolsonaro and Macron.

For the past three years, Republican allies have tried to put out the fires Trump has started, but more and more concerned conservatives are speaking out.   Trump has burned so many bridges that his 2020 reelection chances now look dimmer than ever.  He can't even beat "Alfred E. Newman," which he derisively calls Mayor Pete.

This has led many to speculate if Trump may try to change his ticket to gain fresh confidence in his candidacy.  Nikki Haley's name is once again being floated as a possible veep in an effort to win back suburban white women, who have fled him droves.

His misogyny knows no bounds, attacking Denmark's prime minister after she had the audacity to scuttle his bid to buy Greenland.  Trump got so upset that he cancelled a planned visit with the Queen of Denmark, who had said nothing on the matter.  It seems Trump forgot his main aim of going to Denmark, lost as he was in his lucrative real estate deal first floated by the Wall Street Journal.

His intransigence has become the fodder of late night comics.  Conan O'Brien has a new segment on the Greenland Purchase and just about everyone has been mocking him on his insistence that Alabama was in the path of Hurricane Dorian, even his friends at Fox.  Trump has this bad habit of not being able to let anything go, and no doubt will bring up Greenland again once the storm has subsided.

For a man who was going to re-establish American dominance in the world, things don't look so good.  The Amazon burns, Brexit England is in total chaos, China isn't bending to his will, and dark clouds form on the economic horizon as forecasters predict a recession ahead.  Trump insists the latter is just another effort by the "fake news" to make him look bad, but these days he does a very good job himself.

Trump has not only become his own worst enemy but that of Republicans hoping to hang onto power in the Senate.  The GOP has 22 seats on the line next November, a very large number to defend.  It's not so much his ideology as his blunt approach that worries GOP leaders.  The trade war that Trump initiated last March has spun wildly out of control, leaving Wall Street in a quandary as to where big business stands.

China is no longer buying American farm goods, leaving vast stockpiles of soy beans, corn and other perishable goods to rot in silos across the country.  Trump managed to finagle a last minute deal with Japan at the G7 conference to take some of that corn off his hands, but it is hardly enough to overcome the huge Chinese market that American farmers had come to depend on.  It's not just agriculture he has undercut, but his latest tariff hikes would affect a wide-range of imported goods, which consumers will pay the price at Walmart and other retail outlets.

There is only so much even the most die-hard Trump supporter can stomach.  He's pretty much lost the American farmer, which means the Midwest is now up for grabs in 2020.  His standing in key states like Wisconsin, Iowa, Ohio and even Texas has plummeted.  There's every likelihood he could face one of the most embarrassing losses by a Republican presidential candidate since Barry Goldwater.

Amazingly, Trump seems oblivious to the turning political tide in the country, insisting that all this negative press is just fake news.  His supporters point to the overwhelming lead Hillary had in the polls back in 2015, forgetting that Trump was the insurgent candidate back then.  Today, he is the incumbent.  Not even George Bush had such unfavorable ratings this far out of his re-election bid.

It's not to say Trump can't reverse the tide.  If he were to score a major trade deal with China and restore a sense of normalcy to the economy, much would be forgiven.  However, Trump seems to be going out of his way to anger China, even blaming them for the opioid epidemic in this country by claiming they are the major supplier of illicit fentanyl.  This is a terribly misleading accusation that is sure to further erode our relationship with China.

Trump has had more than two years to work out a deal with President Xi, since he first entertained him in Mar-a-Lago in March, 2017, putting on a lavish firework show in Syria for him.  There has been multiple occasions where we were told a deal would soon materialize, only for negotiations to break down as Trump issued a new round of tariffs.  Last week was a classic example where Trump twice issued tariffs.  China seemed eager to deal, saying it wouldn't retaliate, only for Trump to issue more tariffs in response.  It's like a toddler who has discovered a new toy.

A lot of people sympathize with him in regard to China, even Democrats, but he has gone about a new trade deal in all the wrong ways.  Trump thinks he can strong arm trade deals the way he strong armed real estate deals.  There's no difference in his mind because he looks at the world in the most simplistic terms imaginable.

The child-like wonder was amusing at first but has now become incredibly tiresome.  Trump has to be repeatedly schooled not only on how trade deals work but that island nations aren't for sale.  He and his administration seemed blithely unaware that Greenland enjoys home rule, and that any negotiations regarding its autonomy would have to go through its parliament.  What makes the whole thing so absurd is that Greenland granted the US the right to use its landing fields and air space for military maneuvers.  The US doesn't even need to buy the country to enjoy access to the Arctic Circle over the Atlantic Ocean.

When George Bush lost his way, he had his father to bail him out.  Trump doesn't enjoy such a luxury.  He has made such a mess of things that any Republican who values his political future doesn't want to be directly associated with him.  They may quietly offer him some advice on the side, but it is usually to no avail.  Trump will double down on even the most absurd of premises, as we saw with the path of Hurricane Dorian.

This is why you see him trailing the Democratic candidates by double digits.  Americans have had enough of this infant terrible and want to have an adult in the White House again, even the dotardly old Joe Biden.  He can call it fake news if he wants, but it doesn't change the numbers, even at Fox News.