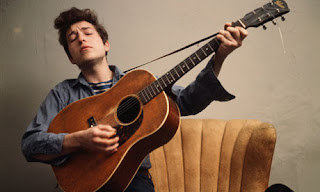 Whoever it was in 1969 who named the very first Bob Dylan bootleg album “Great White Wonder” may have had a mischievous streak. There are any number of ways you can interpret the title — most boringly, the cover was blank, like the Beatles’ “White Album” — but I like to see a sly allusion to “Moby-Dick.” In the seven years since the release of his first commercial record, Dylan had become the white whale of 20th-century popular song, a wild, unconquerable and often baffling force of musical nature who drove fans and critics Ahab-mad in their efforts to spear him, lash him to the hull and render him merely comprehensible. --- Bruce Handy, NYTimes
____________________________________________

I figured we can start fresh with Bob Dylan.  Couldn't resist this photo of him striking a Woody Guthrie pose.  Looks like only yesterday.  Here is a link to the comments building up to this reading group.
Posted by James Ferguson at 10:40 AM