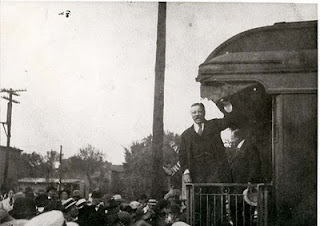 Both Morris and Cooper attach much importance to the 1910 speech Roosevelt made on The New Nationalism while stumping for Republican candidates in Osawatomie, Kansas.  He had lifted the title from a book by Herbert Croly.  He would later combine this speech with other speeches in a book of his own.  But, this speech contained the germ of his idealistic vision of a more vigorous America.  Essentially, an America modeled upon himself.

What he wanted most was for Americans to rise above materialistic persuits and understand their unique role in shaping America's course.  He pushed for greater regulations of industry, but at the same time recognized the value of industry.  He wanted Americans to forgo their sense of isolationism and become more aware of America's growing dominance on the world's stage.  It was almost like he was conferring a sense of noblesse oblige on all Americans.

Cooper notes that the subsequent 1912 election, which pitted Roosevelt against Wilson, lifted American politics to a level not seen since 1800, where grand political philosophies were being hashed out on the stump by two of America's most dynamic speakers.  In many ways both Wilson and Roosevelt shared this sense of a "New Nationalism," but approached it from different angles.
Posted by James Ferguson at 11:59 PM