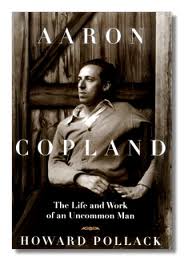 Howard Pollack wrote a comprehensive biography of Aaron Copland, which was published in 1999.  Here is a link to the text.  I've long been a great fan of Copland's music, but never read that much about him.  Interesting to find out he was so actively political in his time.  But, it seems that ultimately Copland was most concerned with capturing America's musical pulse,

Although he came to artistic maturity in Paris, studying with Nadia Boulanger and informing his music with a European-derived professionalism, and although he made it his business to keep up with the latest European trends, Copland infused his music with specific traits that we think of as inherently American: jazzy rhythms, bold melodies, folk tunes, widely spaced sonorities, bright colors, collage structures -- all evoking the bustle of the city and the lonely openness of the plains. As his Argentine friend and colleague Alberto Ginastera wrote: ''Copland has created American music in the same way Stravinsky did Russian music, or Falla Spanish, or Bartok Hungarian.''