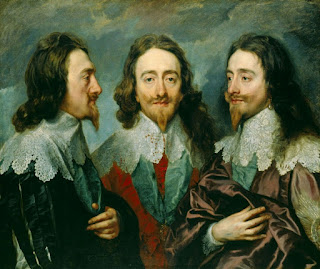 There's a wonderful segment on art and architecture on the History Channel that I enjoy watching.  The other night the host focused on King Charles.  He had lured Anthony van Dyck to London to be the court artist, and he painted numerous portraits of Charles, the royal family and other nobles during his time in England.  The host noted that van Dyck was favored because he usually applied a little artistic surgery to his subjects, making them look more elegant than they really were. This triptych was fascinating.  Unfortunately, van Dyck died young, replaced by William Dobson, who was an excellent portrait artist in his own right.  Dobson tended to be less flattering, which I suppose is why he ended up in the almshouse.  Of course, it was this extravagance that led to Charles' undoing, but as the host noted, Charles is responsible for bringing Baroque to England. 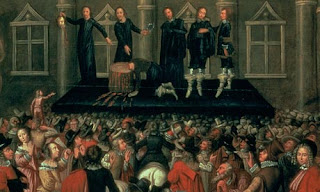 This is a fragment of a larger painting in the National Galleries of Scotland.  Artist unknown.
Posted by James Ferguson at 12:00 PM