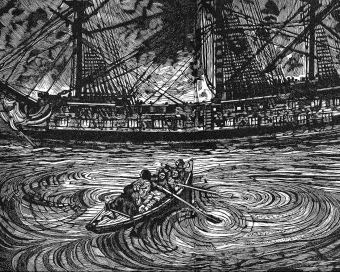 This is one of the stories Greg Grandin interweaves in his new book about the slave trade, Empire of Necessity.  Melville had written the short novel in the 1850s, modelling it on a slave revolt that took place fifty years before aboard the Spanish ship Tryal.  The mutinous Africans demanded the ship's captain sail them back to their home continent, but a New England merchant seaman interceded, forming the basis of Melville's novella.

Grandin's book takes the long view on the slave trade, showing how integral it had become in the fortunes of the European and American powers.  Grandin provides the backstory behind the novella, but takes the reader beyond the story as well, with an epilogue on Herman Melville's America that you can read in the preview of the book at amazon.  There is also this piece on the revolt, which Grandin wrote for The Chronicle of Higher Education.  Benito Cereno was made into a film in 1969 by Serge Roullet.

This could make for a very interesting companion read.  Both books are more manageable than our last effort with Henry James.
Posted by James Ferguson at 4:35 PM