Black Reconstruction in the South 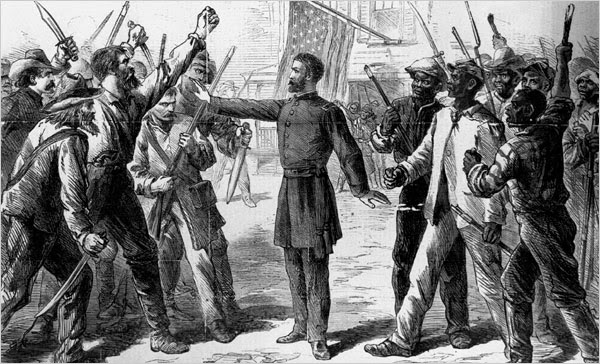 This is black history month, and it only seems fitting that Douglas Egerton's new book, The Wars of Reconstruction is now available.  I wasn't quite sure what to think of it with all the praise being heaped on it by the Wall Street Journal, but Eric Foner gives this book a big thumb up, so that seals the deal for me.

Egerton focuses mostly at the state and local level in the South, illustrating the gains that were made during Reconstruction.  He contrasts this with the violent reactionary elements such as the Ku Klux Klan, ultimately showing that Reconstruction was not a failure, but rather was violently overthrown.

This of course was not the long held view, which Foner focused on his excellent book on Reconstruction.  He, along with Leon Litwack rescued Reconstruction from the dust bin of history, by drawing from the seminal work of W.E.B. DuBois and other prime sources to counter the long prevailing Dunning school of thought on the subject, which rendered Reconstruction a failure.

Still, it seems many see Reconstruction as an unwanted and unneeded imposition on the South, with many Southerners still idolizing figures like Nathan Bedford Forrest, who became a Klan leader after the war.  The battle over civil rights has yet to be completed, especially judging by the disproportionate number of black Americans behind bars, which was the subject of Michelle Alexander's The New Jim Crow.

I think The Wars of Reconstruction would make a great reading group selection.
Posted by James Ferguson at 9:57 AM