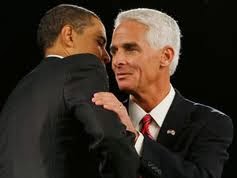 I guess it depends which side of the political aisle you are on as to whether Charlie Crist's new book is good or bad.  Few like a turncoat, unless of course he is Ronald Reagan, so it is no surprise the Republicans have come to hate Crist with a passion almost as much as their hatred toward Obama.  Not surprisingly, this is the subject Crist tackles in his book, The Party's Over, noting how the GOP has degenerated to the point it no longer holds any respect for the Commander-in-Chief if he comes from the other party.

Crist describes a situation where Obama addressed the National Governors Association after his historic election victory.  Like most GOP governors, Crist was doubtful of the new President, but became very upset with the tone of some of his fellow GOP governors who took the opportunity to "lecture" the President, not offering him a shred of respect. Crist chose to scold these governors, noting their hypocrisy in taking stimulus money only to decry it in public.

The former Florida governor also describes the infamous hug that made him persona-non-grata in the GOP.  For Crist it was just a matter of respect, but for the new GOP it was embracing the enemy, the equivalent of Nixon hugging Brezhnev or shaking hands with Mao.  Crist charts the road toward this rhetorically-charged party that he no longer could square himself with, forced to run as an independent in the Florida Senate race, after having been teabagged in the 2010 primaries.

Now Crist runs for governor as a Democrat, having only served one term before.  He currently holds a 7-point lead in the polls, as Scott is one of the most unpopular governors in Florida history.  He no longer worries about his relationship with Obama, although he remains skeptical of the ACA.  He has embraced the expansion of Medicaid though, and has made that one of his campaign issues.

You get the sense Crist is a reluctant Democrat.  He is a man who wants to remain in politics and the only way to do so is to embrace a party.  Obviously, the Republican Party will have nothing to do with him, and I imagine a lot of Democrats don't feel entirely comfortable with Crist.  His switch is seen more as a repudiation of the Republican Party than it is an embrace of Democratic values.  However, it is hard to define what those values are these days other than an acceptance of mainstream opinion, and in that sense Crist is much like Obama.

Here is an excerpt from the book.
Posted by James Ferguson at 11:08 AM