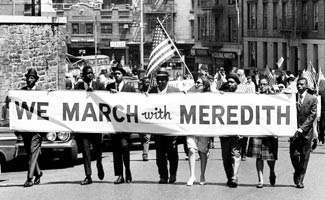 James Meredith generally doesn't get much attention beyond being the first black man admitted to the University of Mississippi in October, 1962.  This didn't come without a lot of grandstanding on Governor Barnett's part, denying him admission a month earlier.  But, the state was forced to drop its objections, and Meredith was begrudgingly accepted into the university.  As you can see, Ole Miss still hasn't exercised its demons.

A young Meredith had much to fear, but he seemed little afraid, having previously defied state laws by registering to vote.  In June 6, he organized a March Against Fear in rural Mississippi, encouraging blacks to register to vote.  Meredith was met with a shotgun blast just South of Hernando, Mississippi, and the march temporarily came to an end.  With reports of the shooting quickly circulating in the press, members of CORE and SNCC mobilized persons and resumed the march.

Stokley Charmichael, who led the Student Nonviolent Coordinating Committee, wasn't afraid of confrontation, and issued a bold new call for "Black Power" which had a jarring impact on the American public.  Not surprisingly, this led to more violent and ugly confrontations along the route, while also giving the Civil Rights movement a new voice in Charmichael. 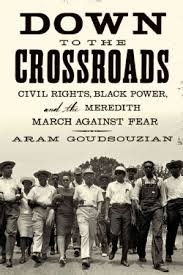 Aram Goudsouzian tells the story from its point of origin, to the fatal shooting in Memphis that left Martin Luther King, Jr. dead, and beyond, in his well-received new book, Down to the Crossroads.  He had the opportunity to interview James Meredith and many others, piecing together what is essentially a first-person narrative of events, which remains vivid in many persons' minds.
Posted by James Ferguson at 1:07 PM