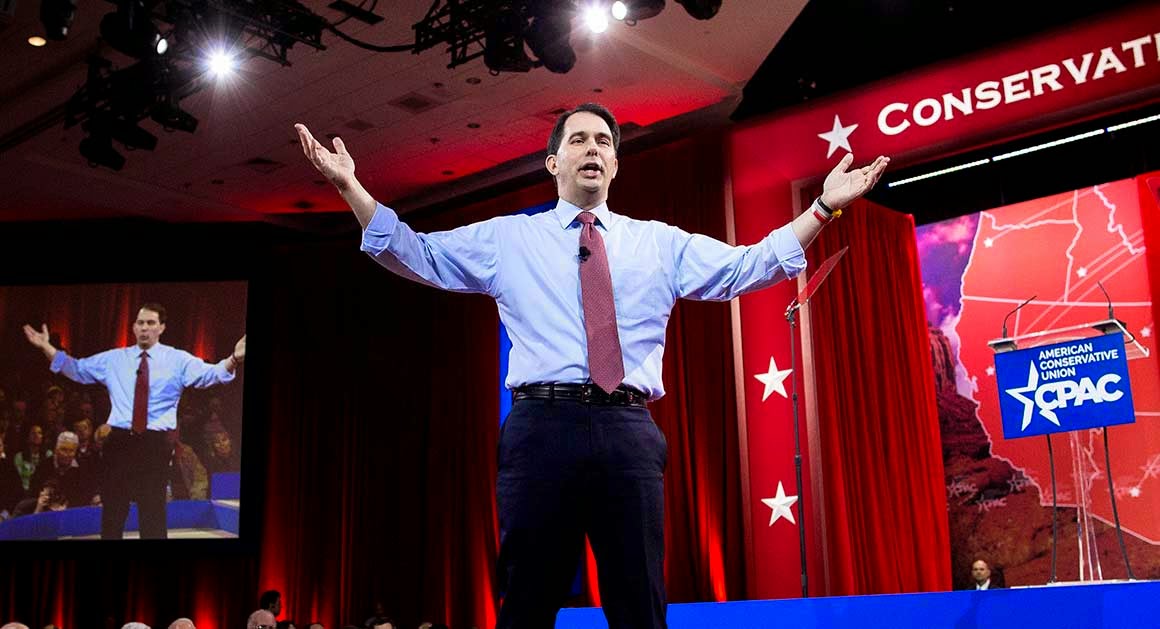 Scott Walker just may end up with one of the shortest presidential campaigns ever.  Mark Salter called Walker "kind of a dumb ass" for equating his anti-union crusade in Wisconsin with his approach to ISIS.  Even Rick Perry thought Walker had crossed the line, noting that the union workers "are Americans."  This was criticism from within his ranks, imagine how well such sentiments will play across the nation.

The governor of Wisconsin was one of many presidential wannabes trying to light a fire at what has become the Republican super event of the season, the Conservative Political Action Conference, or CPAC for short.  It brings out the best and the worst in the Grand Old Party, vying for corporate sponsorship as well as the hearts and minds of the conservative electorate.

Sean Hannity vowed to give every presidential hopeful access to his show, but apparently Chris Christie said no thanks. This befuddled Sean Boy, who went on The Five to tell everyone in the Fox viewing audience what a poor sport Governor Christie is.  It seems everyone wants to be a "king maker" these days, and Sean likes to gloat over how much influence his show has on the conservative electorate.  Even Jeb Bush agreed to sit down with him for a worthless Q&A segment.  Poor Jeb was booed for the most part by the deeply conservative crowd that had no time for immigration reform or the common core curriculum, both of which Jeb stands behind.

Meanwhile, the Republicans were forced to eat crow as their attempt to attach riders to the Homeland Security funding bill failed miserably, with John Boehner looking more ineffectual than ever.  Boehner has a week to gather the remains of his party and join with the Democrats to pass full funding after narrowly avoiding a last minute shutdown of government.

One of the reasons the Republicans get into these messes is because Ted Cruz enjoys nothing more than torpedoing any spending bill with a filibuster.  His attempts to thwart Congress have ended in failure each time, but no matter, the conservative electorate loves him.  He's "a fighter, not a talker."   However, Teddie had to answer some questions about his citizenship, raised by none other than Donald Trump, who wondered out loud how a guy born in Canada to a Cuban father can be a "natural born" American.

This early campaigning might all go for not as Dr. Ben Carson thinks the Obama administration may very well call off the 2016 election.  I found this gem posted by one of my conservative friends on facebook.  Wouldn't that be a hoot.  Four more years of Obama by executive decree!

Yep, when all else fails raise the spectre of an Obama dictatorship.  This will no doubt mobilize the right wing conservative base, who long ago abandoned reason for fear.  This is why Walker brings up ISIS, and tries to equate his anti-union policies with that of fighting radical Islam.  For him, like many conservatives, it has become a matter of us vs. them, and them has become an ever broader group that includes everyone outside their conservative "bubble."

The only problem is that there are a lot more of "them" than there is of "us" in this scenario and this kind of talk only further pushes the GOP to the fringe of the political spectrum.
Posted by James Ferguson at 1:27 PM