The Trouble with Beyonce 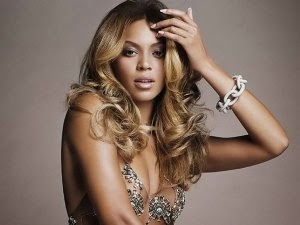 It seems like these days, Beyonce can't get a break.  First, Governor Huck tees off on her for being a bad influence on kids, and now Steve Kroft is telling his luscious gal pal not to dress like Beyonce.  What gives?

It's not like she was part of the Super Bowl festivities or any other high profile event recently.  It just seems that her name rolls effortlessly off some persons tongues and has become synonymous with shame.

Beyonce has been known to wear skin-tight outfits and teeny weeny bikinis, but then what contemporary female pop start doesn't flaunt her body these days?  You don't hear Huck attacking Britney Spears or Shakira.  Judging by Steve's "sexts," which went public, he seemed to enjoy his mistress's racy selfies.

One comes to expect this misplaced moral outrage from Huck, but what's with Steve Kroft, a self-professed "liberal."  Surely, he wouldn't be ashamed to be seen with Beyonce, who can dress quite nicely when the occasion suits her.  Huck seems mostly upset Beyonce has free access to the Obama White House, and even sang, or rather lip-synced the national anthem to her own pre-recorded voice at the last inauguration.  Huck did compliment her on her "pipes."

Sadly, the Beyonce bashing doesn't stop here.  Back in 2012, Harry Belafonte blasted Beyonce for not engaging in enough social activities.  In 2013, She and her husband Jay Z made a high profile trip to Cuba, which was approved by the White House as part of a cultural exchange program, even if it happened to coincide with their fifth wedding anniversary.  Beyonce may not be a Bruce Springsteen, as Harry bellowed, but she and Jay Z, are involved in a number of charitable activities.  For all we know, the two may have been laying the groundwork for normalization with Cuba.

But, Huck can't let go of Beyonce.  He must privately fantasize over her to keep bringing her up on his book promotion tour.   To be fair, he also trashed the gals at Fox for their gutter language.  Seems he's still upset with Megyn for inadvertently calling him "Fuckabee," which was probably his nickname around the Fox studio.  You have to wonder where that came from.

However, I thought Beyonce made it pretty clear that if you wanted to be anywhere near her you had to "put a ring on it."  Surely, that is a wholesome message we can all agree with.  Seems Jay Z did just that.

Posted by James Ferguson at 7:02 PM