The Trouble with Uncle Rudy 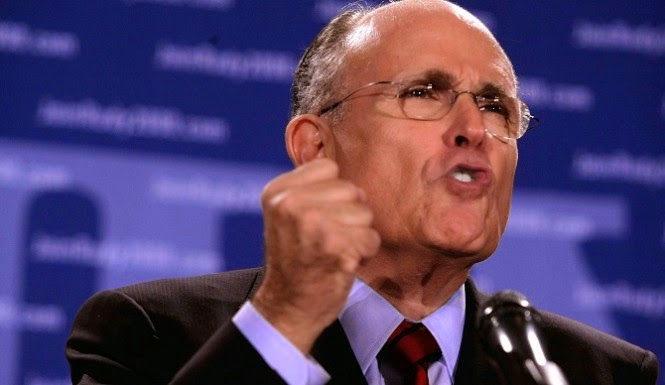 We all have one of those aging uncles who spouts off whatever damn fool notion comes into his head, but we protect him because he is part of the family.  That seems to be the case with Uncle Rudy, who offered up one of his most outrageous comments at a private GOP dinner in New York.

It is hard to believe that 8 short years ago, Rudy Giuliani was being seriously considered as a presidential candidate.  Eric Schultz, deputy press secretary for the White House, said Giuliani floated a similar statement back in 2007, but it pretty much went under the radar screen.  Not this time.

It would be easy enough to excuse Uncle Rudy if he was in an old folks home, but he is still very much a part of the Republican establishment, called on to give speeches at fundraisers like this one.  For a brief moment, he was "America's mayor."  Health problems sidelined him from the US Senate race in 2000, but the attention he received following 911 made him a national celebrity.  He eventually stepped down as mayor, defeated his prostate cancer and became a regular at Fox News, where he is free to say pretty much whatever pops into his head without any questions asked.  However, you know Uncle Rudy has to ask himself over and over again what might have been had he run against Hillary Clinton in 2000 and won.

The network has formed a protective circle around him, as has the GOP in general.  But, you can bet if any Democrat had questioned George W. Bush's patriotism, he (or she) would have been unmercifully skewered.  Instead, Fox Nation features the epic rant on its website, boasting of how Uncle Rudy "destroyed" Obama.

It seems "love" is an unquestioning support of "American exceptionalism," and the Judeo-Christian values it is purportedly based upon.  This has become a "holy trinity" for the GOP, with Mike Huckabee recently launching a very similar attack against Obama for not standing up for Jews, Christians and America.

The "birther" argument may have faded into the background, but Republicans still don't consider Obama a true blue American.  This latest round of Obama bashing comes on the heels of the remarks he made at the National Prayer Breakfast.  Also underlying these latest vitriolic attacks is the White House reaction to Netanyahu's upcoming speech before a joint session of Congress.

In the addled minds of Uncle Rudy and Huck, Obama doesn't stand up for Judeo-Christian-American values. Rather, he apologizes for our past transgressions.  A big no-no, especially when confronting such a repugnant evil as the Islamic State (IS).  Lost in all this overblown rhetoric is that the Obama administration has asked Congress for a war powers resolution to fight IS, albeit limited to air strikes, and that the White House has not abandoned Israel in any way shape or form.  Just ask the Palestinians, who have repeatedly had their UN bid for statehood squashed by an American veto.

It is much easier to paint Obama as a closet Muslim who doesn't have the best interests of the United States in mind than it is to deal with the harsh realities of events unfolding around the world in any meaningful way.

The reason why Uncle Rudy is not being chastised by the conservative press is because it stands behind everything he says.  To them, Obama remains an outsider, living in "Bubbleville," as Uncle Huck calls it, unable to understand, much less embrace, the true meaning of patriotism and faith that they firmly believe underlies this country.  You have to ask yourself, who is living in a "bubble?"