Clowns are the pegs on which a circus is hung 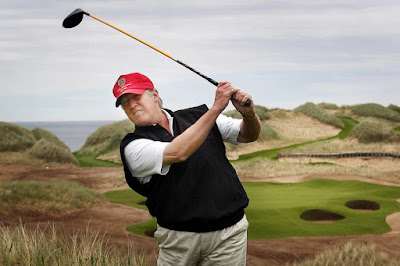 Not a day goes by without a scandal involving Donald Trump.  If his inflammatory first television ad wasn't bad enough, it has now come to light that the Donald cheats at golf. The latest to accuse him is Samuel L. Jackson, who said in an interview for a United Airlines magazine that Trump doesn't play fair.  In typical Trump fashion, Donald fired back that he doesn't recall ever playing Jackson in golf and finds him boring.  Adding that he is "not a fan."

It didn't matter that Jackson produced a receipt from that time they played together and said that Trump's golf club actually tried to hit him up for membership dues, even though he never asked to become a member.  Seems Trump signed him up just the same.

The Washington Post investigated the matter a few months ago, and found a great number of irregularities in his ball lies and scoring, pretty much confirming what Samuel L. Jackson said.  The Donald may be a "very good golfer," but apparently cheats to keep up with his better golfing friends.  He was pissed off mostly at Mark Mulvoy, the managing editor of Sports Illustrated, who contributed to that article, as Trump couldn't deny playing with Mulvoy.  Instead, he called the sports editor a "terrible writer."

I suppose on the scale of scandals this is a rather minor one, but it points to a level of perfidy that characterizes the Donald in all his activities.  Lying appears to be second nature for Trump, which is why he is a natural for politics.  What makes him stand out is that he lies to cover up what he told on national television, like his recent spat with Bernie Sanders.  The Democratic presidential candidate pointed out that the Donald was against raising the minimum wage in one of the GOP debates, which Donald audaciously claimed was a lie.   Unlike Trump's many other lies, this one was immediately verifiable.  No matter, the Donald moves on.

He also attacked Hillary for lying that terrorist groups were using his speeches for promotional videos.  When one such video turned up, his team immediately claimed it was a plant.  Trump later tried to brush it off as just part and parcel of what comes with being honest about terrorism.  Will Hillary get an apology?  Probably not.

The amazing thing is that his growing political base accepts his distortions and lies and remains staunchly behind him in the polls.  This must be extremely frustrating for his opponents, as Trump has said some pretty incredible things that normally would be the ruin of a politician.  However, being a businessman running as a politician is apparently subject to a different level of scrutiny.

There is no sign that he is losing momentum.  Photos have been proudly posted of a Lowell rally where he filled a stadium.  It is hard to say if that photo is from the actual event or some archival photo, but additional photos were posted of long lines waiting outside in the snow to get a chance to see the great articulator of the oppressed middle class.

We can only wonder how long he can get away with it.  Mark Mulvoy and Samuel L, Jackson are unlikely to ever play golf with him again, but this matters little in the minds of his audience.  It will take some truly major revelatory story to undo his standing among his disaffected followers, who firmly believe he is the only man who can make American great again.  As Samuel L. Jackson says, Trump is "more P.T. Barnum than politician."  It was Barnum who offered the pithy quote in the header.
Posted by James Ferguson at 1:09 PM