Who is Megyn Kelly? 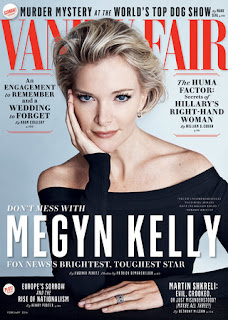 Vanity Fair devoted a cover story to the winsome Fox political personality, who has been at the center of Donald Trump's latest act of defiance.  It is hard to think of her as a journalist, as it is hard to think of anything they do at Fox News as journalism.  Still, she has made a mark for herself by refusing to stand down to Trump and other bully boys like Ammon Bundy on her Kelly File.

The funny thing is that Trump seemed to show great respect for Megyn when she interviewed him on her show last May.  However, Megyn blindsided him with her question at the first GOP debate, and ever since then Trump has effectively used her as a foil on his campaign, and most recently as an excuse to duck the latest GOP debate, which she moderated.  The incident has vaulted her to the top of the Fox News show ratings, surpassing mighty Baba O'Reilly himself.

It's too bad Fox isn't hosting the Super Bowl this year, as Megyn Kelly might have gotten a shot at the President.  Last year, NBC sent Savannah Guthrie to do a segment in the White House kitchen, and this year ABC will send Gayle King to interview both him and Michelle Obama.  Baba got the honor the last time Fox had a shot at the President in 2014, which got quite testy at times.

She did have her chance to meet the President at a Christmas Party hosted by the White House in 2014.  It didn't come out very well, which she related to Jimmy Kimmel, but she had to feel pretty good about confronting him.  Obama still has the better part of a year left, so if she's nice he might be willing to come on her Kelly File.

As Evgenia Peretz noted in her cover story, Megyn Kelly is no Walter Cronkite.   The Kelly File is more opinion than news, reveling in the same kind of stories one sees on O'Reilly and Hannity.  She had a hard time letting go of "Ahmed, the Clock Kid," peeved it seems he got a WH invitation out of the incident.  Hardly what one can call hard-hitting journalism.  However, Peretz is positive of Megyn for the most part, largely because she seems to think Megyn strikes the right balance between outrage and common sense.  Peretz further noted how Kelly tends to soften her guests' indignation with humanity and wit, as she is usually interviewing right wing figures.

Megyn has expanded her boundaries though.  Recently, she had Michael Moore on the Kelly File.  He gushed over her like a high school nerd having a chance to dance with the prom queen.  Everyone is so excited about how she has stood up to the Donald, and the charming way she plays it down.  Yet, she knows full well that this incident has greatly expanded her audience.

Fox has been very good to Megyn.  She had a rather uneventful law and journalism career going before Roger Ailes took her on in 2004.  She started out as Baba O'Reilly's understudy, occasionally filling in for Greta van Susteren, before landing her own show, America Live, in 2010.  Ailes knew he had a good thing in Kelly.  Everyone loves a sharp, good looking lady and Megyn has rewarded Fox ten times over in her ability to play the clever vixen herself.

Megyn Kelly has a long way to go to be Fox's alternative to CNN's Christiane Amanpour, but I don't think she has such aspirations.  It's enough to be receiving praise from her peers Katie Couric, Jessica Yellin, and Campbell Brown.  In her own right, Megyn has become a force to be reckoned with, even if her subject matter is often lacking.

If she is serious about journalism, she will take advantage of the first major opportunity to leave Fox, as all she will be there is a television personality that Roger Ailes will continue to exploit.  He isn't losing in this Trump-Kelly feud, as in the long run Megyn will give him him far more shelf life than the 69-year-old bloviating real estate mogul, making what appears to be his final round.  You almost wonder if Ailes is purposely antagonizing Trump to increase Megyn's value.

Meanwhile, Evgenia Peretz appears to be having second thoughts about that glowing cover story she did on Megyn.