If not Trump, Who? 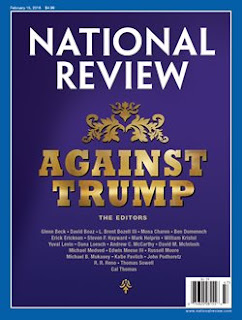 Less than two weeks to the Iowa caucus and he Republican Party seems as lost in the wilderness as it was when it was swamped with all these candidates.  The one thing the Republican establishment can seem to agree on is that it doesn't want Donald Trump (or Ted Cruz) as its nominee.

The National Review gathered together its leading voices to tell its relative handful of readers why Trump is bad for the GOP.  But, what these leading conservative lights fail to do is rally around an alternative, instead splitting among the half dozen other candidates that they feel better represent their values.

There still appears to be some hope that Jeb Bush can unite the real conservatives as Romney did in 2012, surviving a string of early losses to mount a Super Tuesday of Armageddon proportions, wiping out all his rivals with his Super PAC.   However, most political pundits are treating Jeb as a lost cause.

It is clear that there is a seismic shift at the base of the party and the hardcore conservatives want someone new to lead their party out of the wilderness, someone who speaks their language.  Trump has become their unlikely spokesman: a billionaire who literally grew up with a silver spoon in his mouth and has never had to want for anything in his life.  Yet, he has managed to sell himself with his red trucker's cap as the American Everyman. 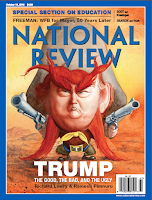 Like their October Yosemite Sam cover, this special issue doesn't help make the National Review's case, as the conservative everyman loves this unrepentant rebel.  It is an image embraced by so many conservatives, right down to the mud flaps on their trucks.  Trump even has the hair to match.  The Republican establishment is shooting itself in the foot in this regard, as it has throughout this campaign.

The GOP's basic problem is that they didn't take Trump seriously.  They thought he would implode and the party would move on.  But, here we are on the eve of the first electoral battleground and Trump has what many pollsters regard as an insurmountable lead.

It may very well be that the Donald is all flash and no substance, but there is Teddy Boy waiting in the wings to pick up the pieces should this implosion take place, as he best represents these angry voters than any of the other remaining candidates.  The Republican establishment is just as much against Cruz as it is Trump.

Last time around, it was relatively easy to rally around Romney, as he was the one relatively sane voice among a cackle of insurgent candidates.  This year, it is the opposite.  Trump has united the insurgent vote, and the establishment has to decide among five remaining viable candidates which one is the most electable, or in this case anti-Trump.

Those candidates are Jeb Bush, Marco Rubio, Chris Christie, John Kasich, and Rand Paul.  The logical choice at this point would be John Kasich, as he is a popular Ohio governor, and everyone knows how important this state is in the electoral map.  Add Marco Rubio to the ticket and you have a very good chance to take both Ohio and Florida in the general election.  It would be very hard for the Democratic nominee to overcome these two losses.

John Kasich is polling relatively well in New Hampshire.  He's a distant second to Donald.  A strong showing might actually vault him back into the mix, but unfortunately Super Tuesday is dominated by Southern states, including Texas, which may very well come down to Trump or Cruz.  It all depends on their ability to get out the vote.

If the GOP had been smart it would have been making more of an effort to promote Kasich.  Instead, he has pretty much had to lift his own load, getting no major personal endorsements, at least none that light up the press like Sarah Palin.  In fact, you would never know he was second in New Hampshire if you didn't make the effort to look.  Chris Christie has been getting far more publicity than Kasich, and he is a very distant fifth.

Trump is only polling 32 per cent in New Hampshire.  The five establishment candidates are polling a collective 45 per cent.  It's hard to swallow your pride and pull out of the race for the benefit of another, but that is what Rick Perry,  Bobby Jindal, Lindsey Graham and Scott Walker did.  It seems it is time for others to do the same.  By splitting the more centrist Republican vote, the Republican National Committee is essentially handing the nomination to Trump, who only has to score 30 per cent to win, and ensure the lion's share of delegates.

Strangely, you don't find many of these conservative polls and pundits talking about this.  They are instead lamenting the crisis of conservatism or still imagining a Trump implosion taking place around the corner.  They have unwittingly played right into Trump's hands by failing to put up a viable alternative to his candidacy.   As Eugene Robinson noted, they have gotten what they deserve, a toxic mix of demagoguery and fake populism that will most likely leave the GOP in shambles.  Score one for Yosemite Sam.