Hillary get your gun

Politics is largely about momentum, and with the Iowa caucus two weeks away, Hillary badly wanted to wreck Bernie's momentum, as he has been gaining ground quickly in Iowa polls.  She doesn't want a repeat of 2008, when Obama staged a big early victory that put her campaign on its heels for the remainder of the primaries.  This explains her strident tone in the fourth Democratic debate, in which she went after Sanders like never before, attacking him on gun control and surprisingly health care because Sanders was opposed to some of the provisions in the Affordable Care Act.

This time it was Sanders who looked the most presidential, brushing off her criticisms, notably national health care, which he has been a strong supporter throughout his years in Washington.  Sanders doesn't think the ACA goes far enough.  He wants universal health care like they have in Vermont.  So, one had to wonder where Clinton was coming from leveling a charge like this against Bernie.

Hillary initially planned to run to the left of Obama, staking out her own terrain and hoping to draw the progressive element of the Democratic Party closer to her, but now she seems to be Obama's staunchest defender, as if she is the true heir to his legacy.  This was the same sort of campaign that doomed her in 2008, when she tried to evoke the Clinton legacy.  Democrats are looking for someone who will go further than Obama has gone, not maintain a status quo.  This is why Bernie has chipped away her once formidable lead in national polls and is breathing down her neck in Iowa.

Charleston is a different story.  Hillary appears to have the sizable "Black vote" behind her in South Carolina, the third stop on the presidential campaign train, so she tried to get the partisan crowd behind her.  Still, Bernie wouldn't let himself get off track, sticking to the primary message of his campaign that 98 per cent of Americans are being shafted by a plutocracy to which Hillary Clinton is beholden.  He noted her massive speaking engagements paid by Goldman Sachs, asking the question how someone so close to Wall Street can represent mainstream Americans' interests?

Hillary has had a hard time defending herself in this regard.  From her earliest days as a corporate lawyer she was associated with such unsavory corporations as Walmart.  You can look at it two ways: she tried to reform this company from within as the first woman board member or she is a corporate shill, which she is so often portrayed in the media.  She wants us to think she has made these corporations more answerable to the people.  It's a tough row to hoe when major corporations saw little repercussions from the financial crisis they created due to their profligate ways.

Americans, however, have been presented a largely negative view of socialism.  Bernie has had a hard time explaining his Democratic Socialism, which he sees as the means of addressing the gaping wealth inequalities in this country.  As the recent $1.5 billion Powerball showed us, most Americans dream of being billionaires, buying well over 75 per cent of all available numbers, resulting in three winning tickets.  It is a wonderful illusion perpetuated by those who want us to think that buying lottery tickets is for a greater good, when in reality it is little more than a shell game.  Bernie has tried to cut through this type of thinking, only to find the pejorative "socialist" tagged to him by the media. 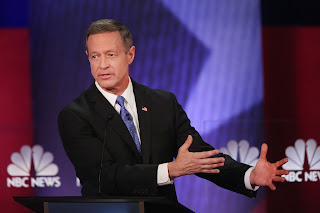 Martin O'Malley did his best to make his case that he is the third way, but once again had a hard time distinguishing himself.  He is this election year's John Edwards, a strapping guy with a good legislative record.  However, he is seen as inconsequential in the media.  He took his shots at both Hillary and Bernie, but failed to leave a mark.  Most recaps of the debate didn't even mention him.  Depending on how fractious the primaries become he does present himself as an appealing Vice-Presidential nominee, especially for Hillary.  Bernie would probably need a woman on his ticket to reach a broader electorate.  Elizabeth Warren appears the obvious choice here.

Anyway, we will see how it all shakes out in Iowa on February 1.  Hopefully, Hillary's campaign team has learned how to manage caucuses, which proved to be her undoing last time around.