The braggadocia of it all 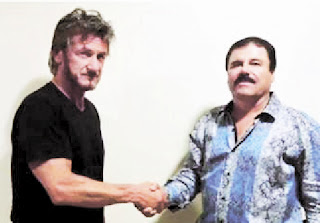 It was an eventful Sunday with Ricky Gervais seeming to want to end his run of hosting the Golden Globes by offering his most acerbic and uncensored comments yet.  He was merciless, but then that's what people love about Ricky.  What can you say about the Hollywood Foreign Press Association, which awards Best Musical or Comedy to The Martian?  I suppose because the soundtrack was principally derived from disco music of the 70s.

No sooner did the Golden Globe awards come to an end than we were dealt the sad news that David Bowie had died.  Ridley Scott actually used Starman in The Martian, when Astronaut Mark Whatney wasn't playing Abba and the Ohio Players from a playlist left by Chief Officer Melissa Lewis.  Not exactly the Mars David Bowie imagined back at the peak of the Glam Rock movement in the early 70s.

But none of this topped Sean Penn's published interview with El Chapo, which has received almost universal condemnation, including that of Marco Rubio, who found the Rolling Stone interview "grotesque," but considered it Penn's "Constitutional right."  How Libertarian of Marco!

Actually, the secret meeting didn't turn out to be so secret after all, as the Mexican police has said that it helped them locate Guzman and bring him to justice over the weekend.  The most wanted man in the world is in the process of being extradited to the US to face multiple charges, provided he doesn't escape from his holding cell again.

Ricky took a pot shot at Sean Penn in his opening monologue, as he is not one to let any breaking story go to waste.  Gervais quipped, "I want to do this monologue, then go into hiding.  Not even Sean Penn will find me.  Snitch."  Yea, one has to think El Chapo is not feeling very good about that interview right now, and either Penn and/or Kate del Castillo, who arranged the interview, could very well be on his shit list.

In the interview, Sean Penn showed a lot of sympathy toward Guzman, which is what has so many persons upset.  After all, this is Mexico's most notorious drug lord, responsible for shipping vast amounts of heroin, meth, cocaine and marijuana into the country.  However, El Chapo says it is all about supply and demand.  He's just a businessman, not a killer.  To which Mr. Penn said, "are we. the American public, not indeed complicit in what we demonize?"

It would have been best if Sean left the editorial comments aside.  Regardless, this was a big scoop.  Leave it to Sean to upstage events Sunday night with his outrageous act of braggadocio, as I believe Denis McDonough, the White House Chief of Staff, called it, although he might have been referring to El Chapo boasting of all the heroin he has shipped into the country.

The interview was far more noteworthy than the Golden Globe awards, which obviously needs to add Science Fiction to its category of Musical and Comedy.  I'm sure either Matt Damon or Leo di Caprio, who also won a globie for his survival tale in The Revenant, would jump at the chance to star in a movie about El Chapo, but they would have to fight Sean Penn for the role.

For those who might remember, David Bowie did team up with Sean Penn back in the 80s, penning and singing the lead song for The Falcon and the Snowman, in which Penn also found himself running afoul of American interests.  Rest in peace, Ziggy Stardust.  You gave us much more than any of these other persons ever did.