Have no fear Erin Brokovich is here 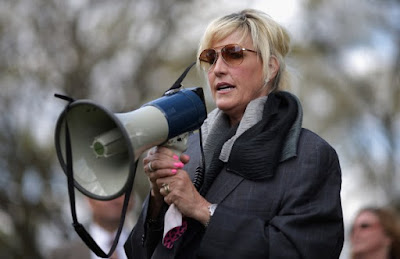 Like a page taken from a Hollywood script, Erin Brokovich has arrived at the scene of the crime to sort out all the particulars in the Flint water crisis, or "poop water" as it has been dubbed.  Actually, it looks more like pee in the pictures, but no matter, it is a serious issue as 10 persons are reported dead since the city dropped the Detroit Water and Sewage Department and started drawing water out of its own river.  Serious mistake.

The city was trying to save money for its residents as the DWSD had jacked up the water rates in an effort to meet its ongoing budget crisis.  Flint's water department tried to use chlorine to clean the river water, but left higher than accepted levels of Trihalomethane, which pose serious health risks.  There are also higher than accepted levels of lead in the water supply.

Of course, the river shouldn't be so badly contaminated.  Governor Rick Snyder is taking the blame for this as it is state department of environmental quality that failed to require needed chemicals to make the water potable.  One of the things conservative governors have cut back on is enforcing costly environmental regulations, figuring enough chlorine will mask anything, but it seems the Flint River is beyond a few chlorine tablets.

Flint's native son, Michael Moore, took to twitter to address this crime against humanity, calling it genocide and demanding the arrest of Governor Rick Snyder, who he considers nothing less than a war criminal.  Moore's excess is well documenting.  Gross negligence is a far cry from a hate crime, which is what he likens it to.

Snyder is under attack from many sides.  He's angry that Hillary Clinton has politicized the water crisis.  Meanwhile, Republican congresspersons are sent a bill to Obama's desk blocking the new clean water rules he decreed last May, which obviously some governors chose to ignore.   To Snyder's credit, he is taking the blame for it.

Fresh drinking water is being flown from all quarters to alleviate the crisis, including a shipment from American Muslims, which no doubt galls conservatives.  It is the Katrina catastrophe all over again, which the Republicans would love to pin on Obama, who was left with no choice to declare a state of emergency.   Yet, it is the GOP that is fighting the clean water act on Capitol Hill, as they see the Environmental Protection Agency as Big Brother.

It has been a disaster movie in the making for quite some time, as state and city officials ignored warnings that the water had an excessive lead content.  Instead, they forced residents to accept the foul water at their own risk.   Here's where Erin comes in.