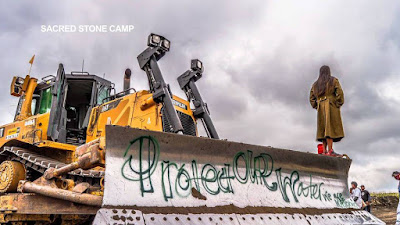 In a surprise move, President-elect Trump met with Al Gore this week to discuss global warming.  It had been billed as a meeting between Al and Ivanka, but apparently that was just the prelude.  Could the Donald actually be considering the former Vice-President and ardent environmentalist as his Energy Secretary, after Harold Hamm said no?   Of course, Coal-tar Joe Manchin would be the more obvious choice, a man who hasn't seen a pipeline he doesn't like, but it seems Ivanka may be steering her father in a more environmental-friendly direction.

Gore has also been a sharp critic of the Dakota access pipeline, and the Keystone Pipeline before that.  Both of which are nothing more than cash cows for the wealthy elite who own shares in these two ventures.  The last 8 years has shown us we don't need these pipelines as there is a surplus of oil thanks to a pro-sustainable energy policy by Obama, which has seen a big rise in wind, solar and biomass energy.  So much so that coal and oil production has dropped off precipitously.

Nevertheless. Energy Transfer Partners has pressed for the Dakota Access Pipeline, down to the last leg at Standing Rock Reservation on the Dakota border, largely to bring oil from the Bakken oil reserves in North Dakota to storage tanks in Illinois, where presumably it is more easily transportable to refineries in Texas.

However, the good folks at Standing Rock were having none of it and rose up in protest.  A stand off that has gone on for the better part of four months with numerous celebrities lending their guest appearances and Jill Stein and Bernie Sanders both making the pilgrimage.  Jill even got arrested.  Al Gore described what was going on as an "absolute atrocity," as state officials stepped in to try to remove the protesters, seeming to forget that Native American reservations are under federal, not state jurisdiction.  But, what finally tipped this issue was the arrival of 2000 military veterans, who vowed to stand with the Sioux in defiance of this stretch of the pipeline that crossed onto their reservation.  They looked like the cavalry, only in this case coming to protect the Indians.

With winter setting in and the potential danger of loss of lives, President Obama finally denied a permit that would have allowed the Dakota Access Pipeline through part of the Sioux tribal reservation.    However, there is a cautious optimism at Standing Rock with many Native Americans refusing to go home.  Energy Transfer Partners are furious because they have to rethink about 20 miles of their pipeline.  They are banking on Trump to reverse this executive order, having contributed to his campaign.

But, the man who would be President has divested in the pipeline and seems to be tipping in favor of the populous fervor in regard to the pipeline.  It's not just spritely film actresses like Shailene Woodley and uppity politicians like Jill Stein who have defiantly protested against the pipeline crossing into the Indian reservation, conservatives who claim brotherhood with the Native Americans are also against this corporate trespassing.  This makes it a whole new issue for conservative politicians to contend with.  Even the Oil Queen Sarah Palin has been surprisingly quiet on the issue.

The pipeline was started when times were good in North Dakota, enjoying a big oil boom thanks to reserves found deep underground.  Problem is that this led to a glut in supply and oil prices went tumbling, resulting in many of these oil wells being abandoned.  It is an ecological nightmare as these companies, many of them the fly-by-night variety, didn't bother to address the mess they left behind.

Looking at the big picture, the roughly $4 billion spent on this pipeline would have been better invested in solar and wind infrastructure.  If you are going to call yourself an "energy transfer partnership" then you need to look at energy more broadly than simply delivering oil from dried up fields in North Dakota that currently have little market value, and are not likely to gain value in the near future.  This was one of those projects dreamed up when oil prices were soaring but now looks like a failed mortgage company venture.

Maybe this is why Trump chose to meet with Gore, hoping to gain some insight into the energy issue that eluded him during the campaign.  He was the Coal and Oil King during the election cycle, vowing to return all these lucrative jobs to the good folks of West Virginia and North Dakota, but now it seems the Donald is having second thoughts, and decided to take stock in sustainable energy, which has a far greater future.

Bakken is a veritable wasteland, emitting a foul and pestilent odor over North Dakota.  There have been attempts to clean it up, but it is a slow process, especially now that many of these wildcat drillers have pulled up stakes and no longer consider themselves accountable for the damage.  It is a perfect example of why we so badly need environmental regulations.

In a very unusual political year, the Incident at Standing Rock stands out as what people can do if they stand up against the government, forcing the President to finally intercede on an issue that should have been a no-brainer.  But, I guess Obama didn't want it impacting on Hillary's campaign, which was already struggling to contain Hurricane Donald.  Now all that remains to be seen is whether Trump will honor the decision that was made and offer a cleaner energy vision of the future than the one he expressed during the campaign?