Of Love and Squalor

Or Which Way Will this Bromance Turn? 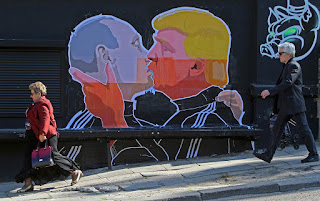 It is hard to understand why Obama didn't release this "intelligence" during the campaign rather than wait until now to give the green light to CIA to inform Congress of the hacking that took place during the election.  The assessment points to a number of operatives with connections to the Russian government, but stops short of making a direct link between the Kremlin and the DNC computer hacking.  For his part Julian Assange says he got the information from other sources.

It is no more damning than was Comey's report to Congress that the investigation into Hillary Clinton's e-mails should be reopened because of the link between Anthony Weiner and Hillary Clinton via Huma Abedin.  But, it would have gone a long way toward casting doubt on the relationship between Trump and Putin.

Throughout the election, Trump praised Putin and felt the US should have stronger ties with Russia.  He never really gave a reason for this beyond fighting ISIS, but it was felt by many that Russian banks are underwriting a great number of his projects, since Donald found it difficult to get the loans he wanted in the US.  With no release of his tax returns, there is no way to prove this, so like everything else we can only guess.

Even odder is why Putin, a self-professed man of the people claiming he only has his President's salary to live in, would so actively support Trump?  After all, Vlad's rise to power was predicated on putting oligarchs like Mikhail Khodorkovsky behind bars.  Time and again, Putin chastised Russian billionaires for their profligate ways, demanding a closer accounting of their companies.  This meant tightened tax laws, which is what landed Khodorkovsky in jail.

Trump would appear to be the very embodiment of everything Putin hates, yet on several occasions the Russian president took the opportunity to praise Trump for his business acumen and continues to do so.  A large part of this bromance hinges on Trump doing away with the sanctions Obama imposed on Russia as a result of the annexation of Crimea in 2014.  Trump feels we should let bygones be bygones and move on, believing he has a valuable partner in his fight against ISIS, which he used as his most effective campaign rhetoric.

However, if we look at the ongoing civil war in Syria, which has resulted in a diaspora of approximately 5 million refugees, Russia has done more to exacerbate the crisis than it has to resolve it with the ongoing support of Bashar Assad and its own air strikes.  Syria was already in turmoil with its long-running drought and civil conflicts, but it turned into a nightmare with the raid on Aleppo, a once thriving city of 2.5 million people reduced to rumble.  It is the same kind of scorched-earth campaign Putin used in Grozny to bring Chechnya to heel.  All for what, to keep Assad in power and maintain Russia's foothold in the Middle East?

Obama didn't make things any better by pressing for Assad to step down in the wake of the Arab Spring.  His famous "red line" speech rings very hollow today, and may well have been the reason Trump was so effectively able to use Syria against Hillary.  By not delivering on this threat, Obama made himself look weak, and Hillary in turn.  Putin has since been viewed as having gotten the better of both of them.

It was pretty clear to everyone that Hillary would run for office in 2016 as no other major Democrat was coming forward.  Putin has had long-standing animosity toward her and vice-versa.  She spoke out harshly against him while serving as Secretary of State, notably at a conference in Vilnius, Lithuania, where she openly chastised Russia in 2011.  So, it isn't much of a stretch that he would orchestrate a cyber-campaign against her.  However, the CIA assessment offers no direct evidence and comes across as little more than idle speculation.

Vladimir Putin very much knows how to get his way.  He has orchestrated a re-alignment of political interests by using such dubious figures as Nigel Farage, Boris Johnson, Julian Assange and a variety of Eastern European politicians to create instability in the EU, which joined the US in sanctions against Russia in 2014.  His patience comes from not being challenged in his home country, so he has plenty of time to conduct his underhanded campaigns without worry of being voted out of office.  European and American leaders don't have that luxury.  Putin is thriving off the current chaos in Europe and the United States, while his own authority was never in doubt despite US and EU efforts through joint sanctions these past two years.

We currently see the ruling parties in France and the Netherlands scrambling to stave off what appears will be a hard push from the Far Right in the upcoming elections.  PM Renzi was forced to eat his words on the referendum he tried to push through Italy that would have solidified his power base.  Austria found itself in a hotly contested presidential election, although in this case the "good guy" won.

Much of this political insurrection is being fueled by the refugee crisis, which Russia helped cause by standing behind Assad rather than seeking a new transitional government in Syria, which is what the US and EU were encouraging.  Syrians were sick and tired of the decades of the Assad regime, dating back to his father, and rose up during the Arab Spring.   Putin wasn't willing to risk a potential new government that would shift its allegiance to the West, as the Assads had long standing commitments to the Kremlin, dating back to the Soviet Union. The chemical weapons reportedly used by the Syrian government had Soviet markings.

Despite all this unrest, stock markets are soaring and there is a general positive view of the near economic future seemingly because of less tensions between the US and Russia in the wake of Trump's victory.  However, it feels more like the calm before the storm.   Too many things have happened this past year to be so rosy about the future.  Brexit will ultimately destabilize the EU, especially if other countries follow suit, which some political leaders have vowed to do.  I don't think the US is ready for the shock and awe a Trump presidency will bring, nor is the rest of the world.  Trump has already hinted at a trade war with China.

But, if the Donald is going to be BFF with Vladimir Putin then he has to be careful how he treats Vlad's friends.  He can't very well alienate China if China is part of a new alliance with Russia and Turkey.  Iran is also part of this alliance, so Trump better be careful what he has to say about this country as well.  After all, Russia was a major player in the nuclear deal struck by the Obama administration in an effort to mend fences.

Trump is literally walking into a mine field, as would have Hillary if she had been elected President.  Putin has very cleverly forged alliances that make it difficult for the US to flex its muscle in Asia without triggering a massive counter response.  So, all those bellicose words best be kept in private conversations not on Twitter.

It is highly unlikely this CIA assessment of Russian hacking during the campaign is going to wipe that Cheshire grin off Putin's face.  He is sitting in the catbird's seat and knows it.  He played this election perfectly and has what many regard as a "useful idiot" soon to be in the White House.  The only question is whether Trump realizes he is being played, and if so what he plans to do about it.