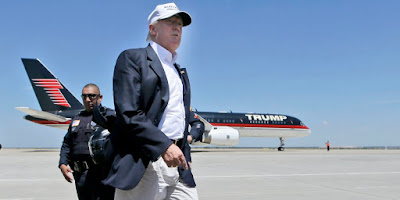 Our President-Elect seems to be having a lot of fun playing Lockheed-Martin off Boeing in his ongoing Twitter wars.  This is a tactic he has used throughout his career.  In his book, Art of the Deal, he boasted how he forced Holiday Inn to buy him out when he made a highly publicized bid to buy them out in the 80s.  He didn't have the capital but it was enough to send stock into frenzy, grossing him 6 bucks on the dollar.  Recently, he sent Boeing and Lockheed stocks into a nosedive by tweeting misleading numbers and making it look like he is trying to negotiate better deals on Air Force One and the notorious F-35's.  However, all he is doing is creating an unnecessary market panic largely for the consumption of the news media.

The Boeing tweets were really something as the new fleet of Air Force One super-planes are scheduled to come in at $2.7 billion, not $4 billion as he stated in his tweets.  He used a number supplied by analysts for rhetorical sake and then made a big show of getting Boeing to promise it wouldn't exceed that cost.  Essentially, he forced the Boeing CEO to meet with him, lending the air of a man in charge of the media-manufactured moment.

Stoked by his success, Trump decided to go after the much derided contract the US government has with Lockheed-Martin for a new fleet of fighter jets.  This deal dates back to the late 90s and has gone much over budget, now estimated at a whopping $1.35 trillion.  Unlike the new Air Force Ones, the F-35 is already in production and jets have been delivered.  Israel has greeted the first part of that order, a deal they signed onto back in 2003.  But, Donald thinks he can do better and asked Boeing to price its F-18's to see if he can find a competitive alternative.  Even in business, this isn't how contracts work.  Once you've made a deal you stick with it unless one or the other partner in the deal fails to deliver.  Lockheed-Martin may have made a cash cow out of the program but they are delivering on their jets and for the most part the Navy is happy with what they are getting.  The Lockheed CEO doesn't appear very anxious to sit down with Donald.

Twitter is going to be Donald's principal weapon in the White House to bring corporations and other nations to heel, although it didn't work so well with China.  He's testing out his power in his Trump Tower before taking over the Oval Office.  Sensing the volatility of the market, Boeing chose to use discretion rather than standing down the President-Elect, much like other industrialists who don't want to get on the Donald's bad side.

Back in 1988, his "bid" at a hostile takeover of Holiday Inn was purely motivated by his dislike for the corporate CEO Mike Rose, who had slighted him in public.  Anyone who doesn't think his administration won't be one of the most vindictive ones ever seen has another thing coming.  Omarosa warned us in a Frontline interview, although it seems he will have to battle "Pootie" for the title of most powerful man in the universe.